OBD II fault code U2011 is a generic trouble code that is defined as, “Module Transmitted Invalid Data (Non-SCP)”, and is set when the PCM (Powertrain Control Module) or any other capable control module detects incorrect data being transmitted between control modules over a serial communications system that does not follow the J1850 aka Standard Corporate Protocol (SCP) communications protocol.

Limited space precludes a comprehensive discussion on automotive communication protocols, but to keep things simple, we can explain the main differences between Standard Corporate Protocols and non-Standard Corporate Protocols- at least as far as the cheap generic code readers that most non-professional mechanics own are concerned. It should be noted, however, that since the technical details of the two classes of communications protocols fall outside an article such as this, we will only provide a general overview of this topic. Let us start with-

Briefly, non-Standard Corporate Protocols include (among others) the UART Based Protocol (UBP), FlexRay, as well as the various variants of the ubiquitous CAN (Controller Area Network) bus systems. In practice, all modern vehicles use both Low Speed, Medium Speed, and High Speed Can bus systems as well as other systems and protocols in various combinations.

In terms of operating principles, each control module on any given non-SCP communications system is programmed to both identify itself when it transmits data and to only recognize data transmitted to it from control modules that are authorized to communicate with it. Thus, in a fully functional non-SCP communications system, all associated control modules will collect input data from sensors and other monitoring devices process that data, and then share the processed data among themselves, and it is here that things can get difficult.

The problem with code U2011

From a diagnostic perspective, the presence of a trouble code like U2011 -“Module Transmitted Invalid Data (Non-SCP)” is of little to no help in identifying the cause of the problem. There are a great many other trouble codes that relate to failures, defects, or malfunctions in non-SCP communications systems, but in all cases, the most valuable diagnostic information such codes contain is the fact that something had failed in a CAN bus system, as opposed to something having failed in a non-CAN bus system.

See the section on “Causes” for more details on possible/probable/likely causes of code U2011.

Where is the U2011 sensor located? 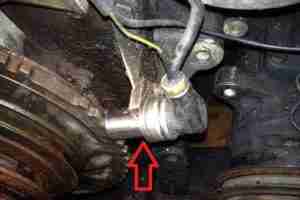 This image shows an example of a typical crankshaft position sensor (arrowed), which could conceivably generate inaccurate or invalid data when it (or the reluctor wheel that works in conjunction with the sensor) malfunctions or fails.

Other possible, and perhaps more likely, examples of defective equipment that could cause code U2011 to set include0

WARNING: Note that we do not recommend that non-professional attempt to diagnose and repair code U2011 and/or any other UXXXX code because this level of diagnostics requires specialized equipment and expert-level knowledge of the affected vehicle to prevent causing possible fatal damage to the vehicle’s electrical system.

What are the common causes of code U2011?

The possible root causes of code U2011 cover a lot of ground, so to speak, but since code U2011 does not identify the communication system in which the failure had occurred, possible causes could include one or more of the following not only in the system that had reported the fault but in almost any other communications system that is associated with the affected system-

Due to the large number of possible causes of code U2011, it is impossible to provide even a partial list of likely symptoms of code U2011 here. However, by noting symptoms like-

– it is (sometimes) possible to narrow the list down somewhat. However, bear in mind that since code U2011 involves a failure or malfunction in a CAN bus system, it might not be possible to access non-global OBD II fault data with generic scan tools. Global information is diagnostic information that relates to emissions, i.e., engine and fuel management data, which should be accessible to all medium and high-end generic tools.

However, interpreting global diagnostic data can sometimes be challenging even for professional mechanics, so we strongly recommend that you seek professional assistance with the diagnosis and repair of code U2011, or any other UXXXX trouble codes to avoid causing serious, if not always fatal damage to the affected vehicle’s electrical system.

So no one has ran across this trouble code?