OBD II fault code U1418 is a manufacturer-specific trouble code that is defined by car makers Dodge, Chrysler, and Jeep as “Implausible Left Wheel Distance Signal” or sometimes as “Implausible Left Wheel Distance Signal Received”, and is set when the PCM (Powertrain Control Module) detects an inaccurate, implausible, erratic, or corrupted signal from the wheel speed sensor from one of the vehicle’s left wheels, as opposed to from a specific left wheel.

NOTE: In the context of code U1418, and any other codes relating to wheel distances on the listed applications, the word “distance” refers to the horizontal distance a wheel covers through one complete revolution of the wheel. While this distance is “known”, in the sense that it is programmed into several control modules, it is nevertheless dependent on the correct wheels and tires being fitted, and that all wheels are inflated to their specified inflation pressures.

However, other systems like traction control, stability control, hill descent, and others also use primary input data from the wheel speed sensors to maintain or restore the vehicle’s stability through selective brake applications to individual wheels via the ABS during sudden or violent direction changes. In these cases, the algorithms that control the ABS require accurate input data on both the rotational speed of the wheels and the distance that each wheel covers during a full wheel rotation, the latter being a function of the wheel diameter.

This data is compared to data obtained from the steering angle sensor and other sensors such as yaw rate sensors, which is in turn compared to the distance that each wheel covers during a full rotation of each wheel. This comparison has two objectives; the first is to verify that all the wheels are rotating and that even though all wheels are rotating, all wheels cover a distance that is equal to their circumference as a means to identify potentially dangerous situations, such as a slide or a skid.

During normal vehicle operation, the distance each wheel covers during a full rotation is monitored continually, regardless of the wheels’ rotational speeds both as a means to verify the integrity of input data from each wheel sensor and to monitor the stability of the vehicle. Thus, when the PCM and/or the ABS control module detects an implausible signal from one of the vehicle’s left wheels, it concludes either that the wheel is covering a bigger or smaller distance than it should, or that the wheel sensor is generating inaccurate data about the rotational speed of the wheel.

This input data is particularly important for the listed applications because the correct operation of the AWD (All Wheel Drive) system depends on all the wheels covering the same distance during each revolution of each wheel. Of course, during cornering, the inside wheels rotate slower than the outside wheels, but the crucial factor here is that the inside and outside wheels still cover the same distance during each revolution, regardless of the wheels’ rotational speed.

In a fully functional AWD system, the engine’s power is vectored between the front and rear wheels by a control module and the changes in torque vectoring are typically seamless and undetectable by an average driver. However, if a condition such as a partially deflated tire on either a front or a rear left wheel occurs, the affected wheel’s diameter is slightly smaller than the (correctly) inflated right wheels, meaning that the affected left wheel will cover a slightly smaller distance during each revolution than the (correctly) inflated right wheels.

Since the vehicle’s suspension systems react to uneven road surfaces, a partially deflated wheel could briefly cover different distances as the vehicle’s weight is “lifted’ off the wheels on uneven road surfaces. Under these conditions, the control module that controls torque vectoring will engage the AWD system during the brief moments when all the wheels cover the same distance and disengage the AWD system when the wheels do not cover the same distance, depending on how often the distance the partially deflated wheel covers changes.

As a practical matter, this creates a situation where the AWD system is engaged and disengaged in rapid succession, and in many cases, this is accompanied by load mechanical “clunking” or “thudding” noises each time the AWD system disengages. This is a serious condition and unless it is corrected promptly, serious damage to the vehicle’s drive train could result.

Thus, when the PCM or another control module detects an implausible signal, regardless of which left wheel is implicated, or the root cause of the inaccurate or implausible data, the PCM, or one or more other control modules will set code U1418 and illuminate one or more warning lights. Note also that depending on the vehicle, the PCM or other control modules may deactivate safety systems such as ABS, cruise control, stability control, and traction control (among others) as a safety precaution since these systems all depend on accurate input data from all the wheel speed sensors to work as intended. In all cases, though, normal braking will still be available.

Where is the U1418 sensor located? 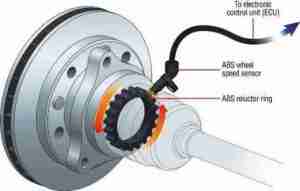 The image above shows the typical location of a wheel sensor relative to the drive shaft and brake system.

Note the “teeth” on the reluctor ring; during normal operation, the teeth each create a small magnetic field when they pass in front of the sensor. This field is converted into an electrical current, and the resulting number of “ON” pulses thus created is counted by various control modules, and then converted into the rotational speed of the wheel, based on the frequency of the “ON” pulses.

Note that in the context of code U1418, the distance the wheel covers is a function of the number of teeth on the reluctor ring, which means that the distance a wheel covers during a full rotation can be monitored independently of the wheel’s rotational speed.

What are the common causes of code U1418?

Common symptoms of code U1418 could include the following-

NOTE: As a general rule, most, or all driver assist systems that use the ABS to function may be disabled or deactivated automatically by the PCM or one or more other control modules when codes such as U1418 or other wheel speed sensor-related codes are present.