OBD II fault code U0124 is defined as “Data bus: Lateral Acceleration Sensor Module – no communication”, and is set when the PCM (Powertrain Control Module) does not receive any communication from the lateral acceleration sensor via the ABS/ESC control module for a predefined period of time. Note that depending on the application, the time needed for communication to be lost before the code sets varies. Typically though, an interruption in communication of once in about 5 seconds will set the code on most applications.

In practical terms, the lateral acceleration sensor measures sideways movements of the vehicle, and should a potentially dangerous situation arise, the ABS brake system is activated autonomously to prevent a vehicle from entering a slide or skid- sometimes even before the driver realizes that a dangerous situation is developing. In practice, the ABS system is used to slow the rotation of selected wheels, thus serving as “anchors” around which to pivot the vehicle to maintain stability during evasive manoeuvres or emergency braking.

Note however that the lateral acceleration sensor is programmed to assume that the vehicle is in good mechanical condition. It cannot detect bald tires, worn suspension components, or compensate for reckless driving. Therefore, since no safety system can overcome the laws of physics, an over reliance on the stability control system should be avoided.

The image below shows the typical configuration of a stability control system, with reference to all the other main sensors and controllers that are involved in making the system work. Note the location of the lateral acceleration sensor in this application. This is only one possible location for this sensor; locations differ widely, and it could be anywhere from under the dashboard, to under any of the seats. Consult the manual for your vehicle to locate the various sensors. 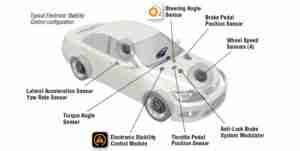 What are the common causes of code U0124?

The most common cause of this code is shorted, burnt, damaged, or corroded wiring/connectors, or other damage to wiring that causes open circuits. Other possible causes could include the following-

It is rare for symptoms other than a stored code and an illuminated warning light to be present. In the vast majority of cases, the affected system, in this case the electronic stability control system will be deactivated.

How do you troubleshoot code U0124?

WARNING: Diagnosing problems in any vehicle’s CAN (Controller Area Network) systems is a highly technical process, and specialized knowledge of automotive electronics and diagnostic procedures is a requirement to prevent secondary damage caused by ill-considered or wrong diagnostic methods. Diagnosis and repair of CAN systems should ideally not be attempted by non-professional persons.

NOTE 1: If you are confident enough in your diagnostic abilities to attempt the diagnosis (despite the above warning) you will need a repair manual, a good quality digital multimeter, and a color-coded wiring diagram since on some applications, the sensor harness/connectors sometimes contains two or more wires with the same thickness and color. Divining the purpose of similar wires is impossible without the benefit of a wiring diagram that clearly shows the function, routing, connections, and final termination(s) of these wires.

NOTE: If any other codes relating to the ABS or other CAN system(s) are present, diagnose and resolve these codes first, before attempting to diagnose code U0124. Also note that on some applications, problems with wheel speed sensors or the ABS controller can set code U0124.

Look for visible damage to the sensor. Note that damage may not always be visible; if the sensor is not damaged by an impact or flooding, consult the manual on the location, color-coding, function, and routing of all associated wiring. Look for shorted, burnt, broken, corroded, or otherwise damaged wiring and/or connectors.

NOTE: If damaged wiring is found, resist the temptation to repair the wiring. Since some CAN systems can be very sensitive to variations in resistance and continuity, the wiser option is always to replace the relevant harness with an OEM replacement to avoid issues and problems later on.

Compare obtained readings to those stated in the manual, and replace the harness if any deviations are found. Retest the system after replacing the harness to ensure that all readings fall within the manufacturers specifications.

If all electrical values fall within specifications, it is likely that the sensor itself is faulty. However, due to the design of lateral acceleration sensors, it is for the most part impossible to test these sensors apart from checking their internal resistance. Signal voltages are dependent on the design and programming of the sensor controller, meaning that shaking it about to see if it generates a signal voltage is NOT a reliable way to test this sensor.

NOTE: The signal voltage generated is dependent on the direction and amount of lateral acceleration, as well as the vehicle’s road speed. On most applications, this sensor remains inactive until the road speed exceeds about 25 km/hour, but this speed also varies between applications. For these reasons, it is very difficult to measure signal voltages accurately, since most software used in generic code readers cannot monitor live data from this sensor reliably, or accurately. Therefore, shaking the sensor about to test for signal voltages is NOT recommended, since the normal operating parameters/conditions of the sensor cannot be replicated accurately.

After replacing the sensor and/or the wiring harness, clear the code, and operate the vehicle to see if the code returns. However, resist the temptation to drive aggressively to see if the stability control system works. If the replacement lateral acceleration sensor works as intended, it will communicate that fact to the PCM via its controller. If on the other hand, it does not work, that fact will also be communicated to the PCM.

If the code does not return after a few cycles of normal operation, it is safe to assume that the problem has been resolved.

If the code does return after a few normal drive cycles, there may be an intermittent fault present. However, unless you possess above average diagnostic skills, resist the temptation to try and diagnose intermittent faults in any CAN or Data Bus system.

Given the complexity of this type of control system, it is strongly recommended that the vehicle be referred to a specialist for professional diagnosis and repair.

While code U0124 usually indicates a no-communication problem with the lateral acceleration sensor, this is not the case on all applications. On some vehicles, code U0124 is an engine code that indicates a fuel/air metering problem. It is therefore recommended that the exact definition of code U0124 as it applies to the application being worked on, be researched before commencing a diagnostic procedure.

BAT Team Discussions for U0124

None found. Ask a question about U0124.
5 1 vote
Article Rating
Subscribe
Login