SPECIAL NOTES: Note that the information provided in this guide is of a generic nature, and is intended for informational purposes only. However, since the basic operating principles of any given engine sensor is largely similar across all makes and models, it is possible to apply the information provided here to a large range of applications. Nonetheless, be aware that neither similarities in operation, appearance, or location, nor effects on engine operation when any given sensor fails is guaranteed, and it is therefore recommended that the relevant technical manual be consulted for details on the location, manufacturers specific diagnostic information, replacement procedures, and other technical information pertaining to the affected application. END OF SPECIAL NOTES.

What does the knock sensor do?

The purpose of a knock sensor on any application is to monitor the engine for signs of detonation (aka pre-ignition), which can cause serious engine damage if the underlying cause of the detonation is not resolved.

As a practical matter, detonation is defined as premature ignition of the air/fuel mixture, and it produces a distinctly mechanical knocking sound that typically occurs at high engine speeds, or when the load on the engine is suddenly increased.

Why is a knock sensor needed?

To improve engine efficiency, the PCM (Powertrain Control Module) keeps the ignition timing as far advanced as it can, given the current operation conditions such as engine speed/load, throttle position, and vehicle speed. However, any increase in the engine speed/load from current conditions will cause the air/fuel mixture to ignite prematurely, thus producing the characteristic knocking sound. To prevent detonation, the knock sensor monitors the frequency at which normal detonation occurs, and it provides the PCM with a continuous live data stream that allows the PCM to control the ignition timing.

If however, the knock sensor detects a change in that frequency, it will generate a signal voltage that is based on the changed frequency, which the PCM then interprets as detonation. To correct the condition, the PCM then retards the ignition timing until the detonation frequency matches a wave amplitude that is based on a pre-programmed value, with all possible values being pre-programmed to suit all conceivable operating conditions.

The practical advantage of this is the PCM can always keep the ignition timing advanced to the point that is most suitable for any given set of engine operating conditions, which increases engine efficiency and fuel economy, while reducing emissions.

How does a knock sensor work?

All knock sensors contain a Piezo-electric crystal that generates an electrical voltage when it is subjected to vibrations but in practice, the crystals are tailor-made for each application it is to be used on in order to eliminate false positives.

If the knock sensor is in perfect working condition and it is used on the application it was designed for, the range of frequencies/signals it produces will not exceed any pre-programmed value in the PCM’s look-up tables. However, when a vibration frequency occurs in the engine that exceeds any pre-programmed value, it will set up a resonating vibration, which the PCM then interprets as a frequency that usually, but not always, translates into detonation as a result of premature ignition of the air/fuel mixture.

It should be noted though that while detonation always occurs as a series of unusual frequencies that varies with engine speed, other mechanical noises such as those caused by bearing knocks or excessive cylinder wear that also vary with engine speed, may be incorrectly interpreted as detonation in some cases.

Where is the knock sensor located on the engine? 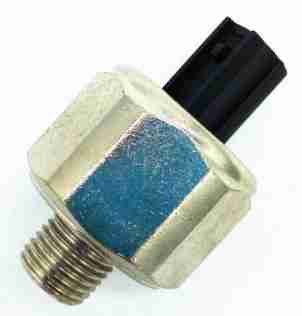 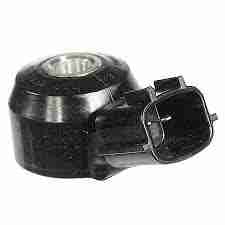 The two images above are representative of the two main knock sensor designs in use today. Note that the sensor on the left screws into the engine, while the sensor on the right is provided with central hole, through which a retaining bolt passes. Also, note that even although the two types of knock sensors are constructed differently, both types of sensor work in exactly the same way

Since the knock sensor is the primary sensor that controls the ignition timing on any engine, a defective or malfunctioning knock sensor has a direct bearing on engine operation and efficiency.

Typical symptoms may include the following-

Note that in addition to the generic codes listed above, one or more manufacturer specific codes may be present as well, and particularly codes that relate to misfires, or the performance of the knock sensor and/or the ignition control modules.

How to test the knock sensor

Due to the nature of the signals that knock sensors generate, the only reliable way to test a knock sensor is to connect its output to an oscilloscope, or to connect a high-end, professional grade scan tool that can function as an oscilloscope to the OBD II system. Note also that the signal can only be interpreted correctly with the aid of suitable reference data in the form of a waveform library that applies to the affected application.

Note that since electrical values in knock sensor circuits vary between applications, all wiring should only be tested for continuity and/or abnormal resistances in strict accordance with the manufacturer’s prescribed procedures for the affected application.

While a fully functional knock sensor will produce a momentary, but noticeable change in the idle quality if the inlet manifold is given a sharp tap with a hammer or a wrench, doing this with a suspect knock sensor has no diagnostic value. For one thing, this method cannot differentiate between a defective sensor and defective wiring, and if a change in the idling quality is produced, there is no way of accurately determining how the change relates to the pre-programmed look-up tables in the PCM.

How to replace the knock sensor

In most cases, replacing the knock sensor on the listed applications involves disconnecting the electrical connector, unscrewing the old sensor with a suitable wrench, screwing in the replacement, and reconnecting the connector. On sensors that are retained by a central bolt, the bolt must be removed, but be sure to retighten the bolt properly during the sensor replacement to ensure proper operation of the knock sensor.

However, given the location of the knock sensor on some applications this may be far easier said than done if the knock sensor is located under the inlet manifold, since working space is severely limited. This sometimes requires the use of special tools, such as a stubby, offset box wrench that incorporates a ratchet mechanism.

If such a tool is not available, one option may be to remove the inlet manifold to gain access to the knock sensor, but note that doing this requires a certain amount of technical ability, and the installation of a new inlet manifold gasket to avoid engine vacuum leaks in the future. The only other viable option is to refer the vehicle to the dealer or other competent repair facility for professional assistance.