SPECIAL NOTES: Note that the information provided in this guide is of a generic nature, and is intended for informational purposes only. However, since the basic operating principles of any given engine sensor is largely similar across all makes and models, it is possible to apply the information provided here to a large range of applications. Nonetheless, be aware that neither similarities in operation, appearance, or location, nor effects on engine operation when any given sensor fails is guaranteed, and it is therefore recommended that the relevant technical manual be consulted for details on the location, manufacturer specific diagnostic information, replacement procedures, and other technical information pertaining to the affected application. END OF SPECIAL NOTES.

What does a fuel injector do?

The primary function of fuel injectors on both gasoline and diesel engines is to vaporize pressurized fuel when it passes through the injector, into the engine or combustion chamber. The degree of vaporization depends on the engine, the type and temperature of the fuel used, and the actual fuel pressure at any given moment.

Why is fuel injectors needed?

How does a fuel injector work?

Contrary to popular belief, fuel injectors do not “inject” fuel into the engine. As a practical matter, fuel injectors are merely valves in the pressurized fuel system that are opened by fuel pressure (on some older diesel applications) or by an electronically controlled solenoid to allow a metered amount of fuel to enter the engine.

In practice, fuel injectors form the termination of the fuel system at each cylinder. The fuel pump pressurizes the fuel system, and the injector’s internal solenoid opens and closes a pintle that controls the amount of fuel that is ultimately injected into the engine while the fuel pump and dedicated fuel pressure regulators maintain the overall pressure in the fuel system.

NOTE: While injectors with solenoids and metal pintles have served the auto industry well for many decades, this design is increasingly being replaced by injectors that use stacks of Piezo-crystals/wafers as a control mechanism. Piezo crystals can expand and contract in reaction to electrical impulses much faster than a conventional solenoid can, which makes it possible to control separate injection events much more precisely than is possible to do with other types of injectors.

However, it should be noted that the PCM (Powertrain Control Module) has the ability to control, or adjust the amount of time the injector remains open, depending on the fuel demands of the engine at any given moment. This “ON” or “OPEN” time is known as the injector pulse width, and increasing or decreasing the pulse width either increases or decreases the volume of fuel that is ultimately injected into the engine during an injection event.

While most injection events typically complete in about 2 milliseconds or less, it has become common for most fuel management systems to split a single injection event into several (up to six or more) separate injection events. Injecting varying amounts of fuel into the engine at different times during an injection event greatly improves the mixing of the fuel and air, which improves combustion, which in turn, increases the engine’s volumetric efficiency while using less fuel at the same time.

It should be noted though the effects/benefits of multiple injection events are increased with additional improvements such as specially designed pistons and combustion chambers, increasing the velocity and turbulence of the intake air through the use of intake runner control flaps, forced induction, variable valve/camshaft timing, and sometimes, the use of multiple ignition sparks on gasoline engines.

Where is the fuel injectors located on the engine? 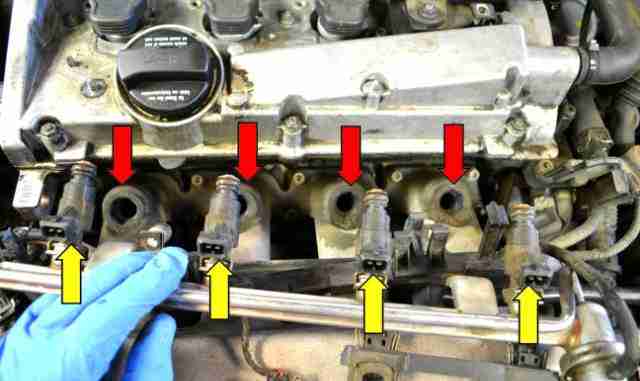 The image above shows the typical location of fuel injectors relative to the inlet manifold and cylinder head on a VW application. Note that while fuel injectors are generally located in similar locations on almost all engines, the actual locations can vary between in-line and V-type engines.

Note however that on some diesel Land/Range Rover applications, the injectors are actually located inside the engine, and removal of the valve cover is required to access the injectors on these applications. Always refer to the manual for the affected application to locate fuel injectors and other fuel system related components. 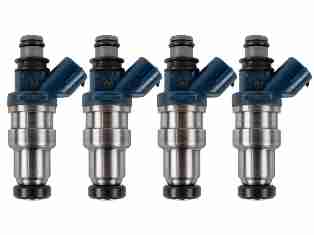 The image above shows a set of typical fuel injectors. Note that while some design features may vary between different brands of fuel injectors, all modern fuel injectors have this same general appearance.

While modern fuel injectors are designed to have reasonably long service lives, they can and do fail for several reasons. Some common symptoms of failed or damaged fuel injectors could include the following-

This usually occurs on high-mileage engines when the injector pintles have become worn due to long use, or because dirty fuel has abraded or damaged the pintle seats. One other cause is excessive fuel pressure; both conditions cause the injectors to leak fuel during the “OFF” or “CLOSED” cycle, and the only reliable remedy is to resolve the fuel pressure problem or replacement of the injectors if the fuel pressure is known to be normal.

Misfires on one or more cylinders

Injectors that have become clogged over time or as the result of using poor quality fuel can cause misfires. While ultrasonic cleaning of the injectors may resolve the issue in some cases, the better option is to replace the affected injectors. Note that “injector cleaning” additives are mostly snake oil, and their use should be avoided.

The causes of the two symptoms listed above have several other effects, which could include the following-

Bad fuel injectors will be indicated by the generic trouble code listed below, but be aware that defective fuel injectors almost invariably cause, or contribute to the setting of a wide range of emissions, misfire, and/or air/fuel metering codes as well. If such codes are present, be sure to resolve all codes in the order in which they were set and stored to avoid a misdiagnosis.

Below are some common generic fault codes that indicate issues with either fuel injectors, and/or their control circuits-

How to test fuel injectors

Since fuel injectors are not repairable, the average non-professional mechanic is limited to only a few basic tests that may or may not resolve the issue, these tests being-

WARNING: Since this test involves making connections to the fuel system, be sure to observe ALL prescribed safety precautions to avoid both personal injury, and the possibility of starting an engine fire that could destroy the vehicle and other property. If you have ANY doubts about your ability to perform this test, refer the vehicle to the dealer or other competent repair facility for professional assistance.

If no fuel pressure related codes are present, perform resistance, and continuity tests on the wiring of the affected injector(s) between the injector and the PCM. Replace or repair wiring as required to ensure that all electrical values fall within the manufacturer’s specifications

This test involves testing the volume of fuel each injector delivers during a fixed period of time, and while it is possible to perform this test on a DIY basis, doing so requires the removal of the injectors and the use of a scan tool that can activate the fuel system while the engine is not running.

Since the object of this test is to measure the rate at which each injector delivers fuel in a fixed period, this test can diagnose leaking and/or clogged injectors. However, since this test requires a reasonable degree of technical ability, it is not recommended that persons without the required skills, knowledge, equipment, and tools attempt it due to the high likelihood that some components may be damaged during the injector removal process, or that pressurized fuel may be cause personal injury, or an engine fire.

WARNING: If you have ANY doubts about your ability to perform this test, refer the vehicle to the dealer or other competent repair facility for professional assistance.

How to replace fuel injectors

WARNING: In some cases, it may be necessary to remove or partially disassemble one or more unrelated components to gain access to the fuel rail and injectors for the purposes of testing and replacement of injectors. If you have ANY doubts about your ability to perform the required disassembly or removal of components, refer the vehicle to the dealer or other competent repair facility for professional assistance.

Nonetheless, fuel injector replacements generally follow the same pattern on all applications. Below is a generic procedure to replace all the fuel injectors as a set-