When the PCM determines that a shift point had been reached, it actuates the clutch to decouple the transmission from the engine, after which actuators deselect the current gear, and depending on the operating conditions, selects the next higher or lower gear. When the PCM receives confirmation from various position sensors that the next gear had been selected successfully, it again activates the clutch actuator to re-engage the clutch, which “reconnects” the engine to the transmission. Note that the position of the clutch actuator is continually being monitored by the PCM. 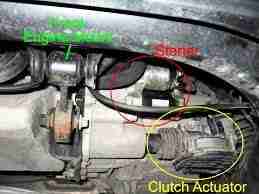 Some common causes of code P0901 could include the following-

Some common symptoms of code P0901 could include the following-

NOTE: Some Jeep, Chrysler and Fiat models that were built between 2014 and 2016 for the NAFTA, LATAM, EMEA and APAC markets, and that have undergone the S55 safety recall, may experience code P0901 that may be accompanied by serious driveability concerns and issues. On these models, the problem can be resolved by replacing the entire transmission harness with an upgraded OEM harness.

Refer to the manual to locate the clutch actuator and its associated wiring. Determine the function and color coding of all wiring to avoid a misdiagnosis.

Perform a thorough visual inspection of all wiring and look for damaged, burnt, shorted, disconnected, or corroded wiring and/or connectors. Replace wiring or make repairs as required.

If no visible damage to wiring is found, prepare to perform resistance, continuity, ground integrity, and where applicable, reference voltage checks on all wiring. Be sure to disconnect all wiring from all relevant control modules to prevent damaging the controllers during resistance testing.

Compare all obtained readings with the values stated in the manual, and replace wiring or make repairs as required to ensure that all electrical values fall within the ranges specified by the manufacturer.

If the fault persists but all wiring and electrical values check out, use the scanner to cycle the clutch actuator multiple times to rule out an intermittent fault. However, be sure to monitor the current draw, since an excessive current draw could indicate either broken or worn clutch components, or a defective/ sticky actuator, and sometimes both.

NOTE #1: If the actuator is hydraulically operated and it has to be replaced, refer to the manual to determine the correct procedure to follow to remove and reinstall the replacement actuator without allowing air to enter the system. Purging air from a hydraulic system can sometimes be very challenging, so follow the instructions to the letter to avoid this problem.

NOTE #2: If a defective/sticky clutch actuator is suspected, replace both the actuator and the position sensor as a set to ensure that the PCM is supplied with accurate input data. Also bear in mind that on most applications, the new actuator and position sensor need to be adapted to the PCM by performing a prescribed adjustment and/or relearning procedure. Be sure to perform all required procedures EXACTLY as described in the manual to avoid a recurrence of the problem, or refer the vehicle to a competent repair facility for professional assistance with the relearning/adaptation procedure(s).

If the steps 1 through 4 did not resolve the problem, suspect either defects in clutch components, or a failed PCM. However, it is far more likely for the clutch to be defective than the PCM; if a defective clutch is suspected, refer the vehicle to the dealer or other competent repair facility for professional diagnosis and repair, since this type of diagnosis/repair requires removal of the transmission.