OBD II fault code P0887 is a generic code that is defined as “Transmission control module (TCM) power relay control circuit high”, and is set when the PCM (Powertrain Control Module) detects an abnormally high voltage (or any voltage at all) from the relay that supplies the shift solenoids with power when the transmission is operating normally. Note that when the ignition is switched to the “ON” position, the relay control circuit should either have no voltage, or a voltage that agrees with a predetermined value.

On applications that use a relay to supply voltage to the shift solenoids, the PCM checks that no voltage reaches the shift solenoids when the ignition is switched “ON”, by verifying that the relay’s contact points are open. When the relay is open, and does not pass current to the shift solenoids, the transmission is effectively in “limp mode”, but before the relay is activated, the PCM checks for voltage at various pressure switches in the transmission. In a fully functional transmission and its control system, there should be no voltage at any pressure switches at this time and the PCM will supply power to the power control relay only after this is verified.

In practice, the shift solenoid control relay’s output is fed back to the PCM via a dedicated circuit known as the Transmission Control Relay Output Circuit, or sometimes as the Switched Battery Circuit on some applications.

The image below shows a typical transmission control module (TCM) power relay, such as might be found on most modern applications. 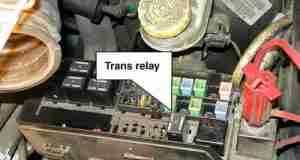 Possible causes of code P0887 could include the following-

Common symptoms of code P0887 could include the following-

NOTE: Apart from the most common symptoms listed here, other symptoms are largely make and model specific. Refer to the manual for the affected application for detailed information on symptoms that are likely to affect that application.

NOTE 1: Take note that on some applications, most notably some Jeep and Chrysler products built in 2015, code P0887 often occurs as the result of software issues. On these applications, the problem can be resolved by reprogramming the Transmission Control Module with revised and updated software.

Identify the terminals on the really that passes battery current to the shift solenoids, and check for voltage between them. On most applications there should be no voltage; however, on some applications (e.g. some Toyota applications) there can be about 4 volts present. Refer to the manual to determine which value applies to the application.

Bear in mind that the relay can only pass full battery voltage if the electromagnetic coil is energized, so check that there is no current between the input terminal and a suitable ground. If there is current on this circuit, it is most likely short circuited to battery positive. Make repairs as required, and recheck the circuit to verify that it is not feeding power to the relay.

If all wiring checks out, remove the shift solenoid from the vehicle and perform resistance tests between all pins as per the instructions in the manual. Note that “generic” resistance values do NOT apply. The resistance values on these relays vary greatly between applications, as do the maximum allowable deviations from stated values.

Compare all obtained readings with those stated in the manual, and replace the relay with an OEM replacement if ANY value does not agree with a stated value very closely.

While steps 1 through 5 will resolve code P0887 in nine out of every ten instances, it does sometimes happen that an intermittent fault can make resolving this code definitively extremely challenging and time consuming.

Thus, if an intermittent fault is suspected, repeat all steps/tests/checks until the fault is found and repaired, or refer the vehicle to the dealer or other competent repair facility for professional diagnosis and repair.