NOTE: While this code typically refers to the solenoid and the control circuit that controls the torque converter lock-up clutch, car manufacturers do not always label circuits, sensors, parts, and components in the same way. Therefore, it is necessary to refer to the manual for the affected application to determine which transmission shift solenoid/circuit is labelled “E” on that application. Failure to identify parts, sensors, and circuits correctly could lead to a misdiagnosis, and the unnecessary replacement of parts and components.

All automatic transmissions use varying degrees of hydraulic pressure to engage/disengage various transmission components such as clutch packs and the torque converter lock-up clutch in order to accomplish gear shifts.

To make gear shifts comfortable and efficient, the PCM/TCM controls a series of pressure control solenoids to redirect pressurized transmission fluid from one circuit to another, based on input data from a variety of engine and driveability sensors. This process is roughly analogous to the way different gears are decoupled and engaged in different combinations in manual transmissions to bring about different gear ratios.

However, in automatic transmissions the process of establishing different gear ratios smoothly and reliably depends on how efficiently pressurized fluid is channelled between hydraulic circuits in order to engage/disengage clutch packs and other components. Thus, should one pressure control solenoid (or its control circuit) fail, one gear ratio cannot be disengaged or “deselected” before the next ratio is selected, since the flow of pressurized fluid cannot be controlled effectively.

Note however, that on applications where code P0770 refers to the torque converter lock-up clutch, gearshifts may still be possible, albeit at reduced engine power since the PCM/TCM may initiate a failsafe or limp mode both as a safety measure, and to prevent possible damage to the transmission.

Nonetheless, when code P0770 is set, the PCM/TCM will recognize that it can no longer control the flow of pressurized transmission fluid effectively, and on most applications, a warning light will also be illuminated.

Where is the P0770 sensor located? 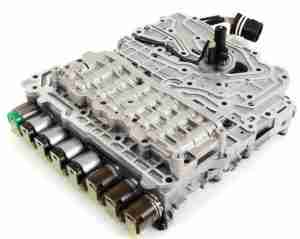 Nonetheless, regardless of how and where the shift solenoids are arranged on any given transmission, it is critically important to refer to the manual for the affected application to locate and identify shift solenoid “E” correctly. Failure to do so will not only result in a misdiagnosis, but also in the distinct possibility that severe damage to the transmission could occur.

i need to know tha location of this part (PO770) in what part of the car is.
thank you for you help