OBD II fault code P0743 is a generic code that is defined as “Torque converter clutch (TCC) solenoid –electrical”, and is set when the PCM (Powertrain Control Module) detects an abnormal voltage in the electrical control circuit of the TTC (Torque Converter Clutch) solenoid. Note that this code refers to an electrical malfunction of the TTC solenoid or its control circuit, and only very rarely to issues with hydraulic pressure or mechanical failures of an automatic transmission.

Virtually all modern applications use a Torque Converter Clutch that is controlled by the PCM (via a solenoid) to regulate the amount of slippage between the engine and the transmission. Since torque converters depend on the shear strength of transmission fluid to transfer power from the engine to the transmission, some slippage that affects performance and fuel economy negatively is inevitable.

Thus, by using a mechanism that locks the two halves of the torque converter together, a solid link, much like how a clutch on a manual transmission locks the engine to the transmission. The advantages of this include the facts that by regulating/varying the amount of torque converter lock-up, gear shifts can be made almost seamless, and that on powerful high-end applications, large amounts of slippage can be used to both make gearshifts smooth and comfortable, and to protect transmission components against damage caused by aggressive acceleration.

The image below shows a typical TTC solenoid and how it (and its associated parts) fit into the valve body of a typical automatic transmission. 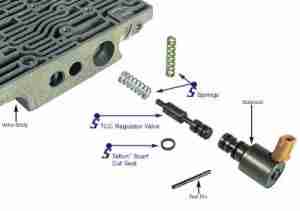 Some common causes of code P0743 could include the following-

Some common symptoms of code P0743 could include the following-

Assuming that the transmission fluid is serviceable and up to the proper mark, record all fault codes present, as well as all available freeze frame data. This information could be of use should an intermittent fault be diagnosed later on.

Refer to the manual to locate and identify the TTC wiring harness and connectors. Inspect all wiring and connectors for damage and corrosion that could cause open and/or short circuits. Make repairs as required.

If the code persists, prepare to perform resistance, continuity, and ground checks on all associated wiring. However, be sure to determine the function and color-coding of all wiring before commencing with any tests, and be sure to disconnect all wiring from all relevant control modules to prevent damaging one or more control modules during resistance and continuity tests.

Compare all obtained readings with the values stated in the manual, and if discrepancies are found, make repairs as required to ensure that all electrical values fall within the ranges specified by the manufacturer.

If the fault persists, but all wiring checks out, use the scanner to command the TTC solenoid “ON” and “OFF”, while monitoring the status of the solenoid on the display. If the solenoid’s status does not change but the wiring is known to be good, the solenoid is almost certainly defective.

Note that while it may be possible to replace the TTC solenoid on a DIY basis, this is generally not possible on transmissions with “life-time” fluid fills. In these cases, the better option is to refer the vehicle to the dealer or other competent repair shop for professional assistance.

If however the solenoid can be replaced, be sure to follow the instructions in the manual exactly to avoid causing damage, albeit inadvertently.

If the TTC solenoid is located inside the transmission, be sure to replace both the filter and the oil pan gasket after the solenoid had been replaced. Note that it is good idea to use the scanner to command the new solenoid “ON and “OFF” before replacing the oil pan to be sure that the replacement is working properly.

Once it is certain that the transmission fluid is up to the mark, operate the vehicle for at least one complete drive cycle before scanning the system again to see if the code returns. If the code does not immediately return, the repair was successful.

On my 05 sport trac I am getting the P0743 TCC circuit electrical code .
The trans shifts into all gears , how ever the light on the dash keeps flashing ( OD /off).
When the light goes off the trans goes back into OD , this is a steady on and off . I clear the code restart the truck and after just a few seconds it comes back on . The truck will seem to run fine. I can click the OD button on the shift lever and it does take it out of OD. When I turn the truck off and go to restart the code comes back. This started after I had to change out my motor The trans is 18 months old . Where and how do I self diagnose ? Please if you can help