OBD II fault code P0742 is a generic code that is defined as “Torque Converter Clutch Circuit Stuck On”, and is set when the PCM (Powertrain Control Module) or TCM (Transmission Control Module) detects a defect, failure, or malfunction that causes the torque converter lock up clutch to remain engaged. Note that this code only applies to applications with automatic transmissions, and that the failure, defect, or malfunction could refer to electrical, mechanical, or hydraulic issues.

Torque converter lock up clutches fulfill several functions, and in a fully functional system, these are-

Automatic transmissions rely on the shear strength of the ATF fluid to transmit power from the engine to the transmission through a torque converter, but since torque converters consist of two separate halves that can rotate at different speeds due to the nature of its design, some engine power is lost through the differential rotation. This power loss is known as “slippage” and it has a measurable effect on fuel consumption.

If the lock-up clutch is engaged, it functions in exactly the same way as a clutch on a manual transmission, in the sense that it provides a solid mechanical link between the engine and the transmission, thereby eliminating any slippage between the two halves of the torque converter. As a result, all of the engines’ power is transmitted to the transmission, which means that no fuel is wasted.

As engines have become increasingly more powerful, gearshifts have become correspondingly harsher, and although advances in transmission control strategies have made gearshifts smoother and more comfortable in recent years, electronic control measures alone cannot eliminate all of the harshness.

However, the advent of torque converter lock up clutches has made it possible to induce some slippage during gearshifts to absorb some or all of the harshness that occur when gearshifts are made under hard acceleration / deceleration. In fully functional systems, gearshifts are now almost undetectable even during aggressive driving, which greatly improves the overall driving experience.

While the engines in many, if not most high-end vehicles are now capable of producing more power than is strictly required, the fact is that the development of automatic transmissions in terms of durability has not kept pace with advances in engine design, with transmission clutch packs still being particularly vulnerable to high torque inputs.

In terms of operation, the PCM/TCM uses pressurized transmission fluid and a clutch actuator to keep the clutch engaged during steady speed driving. However, if driving conditions require it, such as aggressive acceleration from a standing start, or sudden accelerations from low road speeds, the PCM uses input data from the engine speed sensor, throttle position sensor(s), and others to calculate the amount of clutch slippage that is required to prevent damage to the transmission, while still minimizing power losses through clutch slippage.

As a practical matter, the PCM uses a dedicated pressure control solenoid to regulate the flow, and hence the pressure, of the transmission fluid to and from the clutch actuator, as well as a clutch position sensor to be able to measure, and compensate for the mechanical wear in clutch components. If all the components in the system work as designed, the driver is unaware that the system is functional; however, if a failure, defect, or malfunction anywhere in the system prevents the torque converter lock up clutch from disengaging, the result is serious drivability issues because the engine cannot be decoupled from the transmission.

Where is the P0742 sensor located? 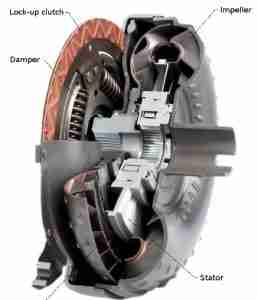 The image above shows the typical layout of a torque converter that incorporates a lock up clutch. It should be noted however, that while torque converter lock up clutches are repairable, doing so requires removal of either the engine, or the transmission from the vehicle, which requires tools, equipment, and skills the average non-professional mechanic generally does not possess.

If a failure of the actual torque converter lock up clutch is suspected, the wiser option would be to refer the affected vehicle to the dealer or other competent repair facility for professional diagnosis and repair.

It should be noted that while torque converter lock up clutches can, and do fail in various ways, it is more common for code P0742 to be set by other, less serious causes, which could include the following-