What Does Code P06DD Mean?

OBD II fault code P06DD is a generic trouble code that is defined as, “Engine Oil Pressure Control – Circuit Performance Problem”, or sometimes as “Engine Oil Pressure Control Circuit Performance/Stuck Off”, and is set when the PCM (Powertrain Control Module) detects that the engine oil pressure is above or below predefined allowable thresholds, given current operating conditions. Note that allowable pressure thresholds are different for different engines, as is the time required for the code to set while the actual oil pressure deviates from the desired when the oil pressure control solenoid is in the “ON” position.

NOTE: Note that this code only applies to vehicles with variable geometry oil pumps that can be adjusted to increase or decrease the oil pressure under different operating conditions both to satisfy changing lubrication requirements and to reduce parasitic power losses.

Although internal combustion engines have reached a very high level of technical sophistication, even the most advanced engines are only about 30 percent efficient*, with the other 70 percent going to waste in the form of heat. Most of this heat is caused by internal friction and pumping losses, and although engineers have devised several highly sophisticated combustion processes to extract more energy from liquid fuels, the problem remains that friction, pumping losses, and parasitic power losses caused by ancillary equipment, and even by critical engine components, still make modern engines about 70 percent inefficient.

* This figure is about 40 percent for diesel engines since diesel fuel contains more energy per unit of volume than gasoline does.

As a practical matter, modern internal combustion engines of all types and designs have reached a point where they can for all practical purposes, not be developed any further without essentially, rethinking the concept of liquid fuel combustion. However, with the rapid pace of developments in electric vehicle technology, no car manufacturer is going to invest hundreds of billions of dollars into developing entirely new liquid fuel combustion technologies, and the engines to go with those technologies. In fact, most major car manufacturers have ceased any further development of combustion technology in favor of developing electric cars and their related technologies.

In the real world though, large-scale adoption of electric vehicles is still a decade or two away, and in the meantime, car manufacturers still have to contend with exhaust emissions regulations that become stricter every year. So, from design, engineering, and cost perspectives, the only aspect of internal combustion engines that can still be somewhat developed is methods and ways to decrease, if not eliminate parasitic power losses caused by things like oil pumps, water pumps, radiator fans, and alternators whose output cannot be adjusted, regulated, or even turned off completely for short periods.

Thus, as far as oil pumps are concerned, the problem is that their output is fixed, and tied to engine speed. Put differently, this means that an oil pump delivers a fixed volume of oil per engine revolution, and as the engine speed increases, the pump delivers more “fixed volumes” of oil per unit of time, which increases the total volume of oil the pump delivers. However, since the oil pump has a fixed geometry, and, therefore, a fixed output per engine revolution, the oil pressure remains constant on many engines. Again, put differently, this means that increasing the engine speed on many engines increases only the volume of oil the pump displaces, while the overall pressure remains constant, or varies very little.

As a result of the above, the high amount of torque required to drive the oil pump at low engine speeds robs especially small-displacement engines of significant amounts of power. More to the point though, the effort required to drive the oil pump also requires more fuel than is strictly necessary, which has the corollary that increased fuel consumption creates additional waste heat and exhaust emissions.

To address this issue, engineers have devised variable geometry oil pumps, meaning that the internal components of these oil pumps can be adjusted to vary the volume of oil (and, in some designs, the pressure) the pump delivers per engine revolution at different engine speeds. There are too many different designs of variable oil pumps in use today to provide explanations of how each design works, but below is a generic description of the basic operating principles of these types of oil pumps-

All variable geometry oil pumps contain a moving part that alters the size of the inlet and outlet ports relative to each other. This movement is typically controlled via a computer-controlled solenoid that moves the moveable “gate” to a position commanded by one or more control modules. This movement has the effect of changing the diameters of both the inlet and outlet ports; by decreasing the inlet port, and increasing the diameter of the outlet port, the engine sacrifices less power to drive the oil pump, thus decreasing parasitic power losses significantly.

Since the lubrication system’s correct operation is critically important for efficient engine operation, the PCM and other control modules monitor the actual oil pressure vs. the desired oil pressure in the engine continuously via dedicated oil pressure and other engine sensors. Therefore, if the PCM (or other control modules) detects a defect, failure, or malfunction in the oil pump’s control solenoid’s control circuit that prevents effective control of the coil control solenoid,  one or more control modules will recognize that it/they cannot control the oil pressure effectively, and will set code P06DD and illuminate a warning light that may or may not flash red.

Where is the P06DD sensor located? 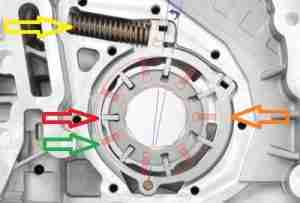 This image shows an example of a typical variable geometry oil pump- in this case, a pump from a GM application.

Note, though, that oil pumps of all types and descriptions, including variable geometry oil pumps, are typically located inside the engine, and are therefore not accessible without removing and dismantling the engine. We do not recommend that non-professional mechanics attempt this procedure, so if you suspect that you may be experiencing issues with the oil pump on your vehicle, the wisest course of action would be to seek professional assistance with diagnosis and repair.

What are the common causes of code P06DD?

What are the symptoms of code P06DD?

That is the best explanation I ran into the net, searching for information regard this issue.
Thanks alot!

Thanks Tal! Please note we welcome donations to help keep us alive. We publish articles every month.