The purpose of glow plugs on diesel engines is to provide a source of intense heat to assist in the combustion process of the air/fuel mixture when the engine is cold, or below a minimum threshold temperature. Typically, the glow plug control circuit on an application that uses a dedicated glow plug control module consists of the-

However, at low ambient temperatures, it can be very difficult to ignite a diesel fuel/air mixture at start up because not only is combustion less efficient at low temperatures, but also because the air fuel mixture may not be compressed sufficiently to initiate combustion at engine cranking speeds. Thus, to eliminate these problems, diesel engines use electrically heated glow plugs to provide a source of heat in the pre-combustion chamber of each cylinder to assist in igniting the air/fuel mixture at the compression peak.

The biggest practical advantage to using a dedicated glow plug control module is that unlike older control systems that supply all the glow plugs with current simultaneously, most dedicated control modules can supply each individual glow plug with current separately. Moreover, since modern glow plug control modules can sense the electrical resistance in each individual glow plug, it can feed varying amounts of current to different glow plugs, which has the practical advantages that all glow plugs are heated equally, and that the overall heating time for all glow plugs is therefore greatly reduced. In turn, reduced warm-up times means that cranking times of cold engines is also reduced, which extends the life of the starter motor. By way of comparison, some older glow plug control systems took up to 10 seconds (and sometimes longer) to heat up the glow plugs, whereas modern systems can heat up the glow plugs in less than three seconds.

From the above it should be obvious that the glow plugs and their control circuits/mechanisms are critically important parts/components of a diesel engine, because if the control circuit fails, there is a high likelihood that if the engine is cold, the engine cannot be started, or that it can only be started with difficulty. Therefore, if the glow plug control circuit fails, the PCM (or other control module) will set code P0670, and may also illuminate a dedicated warning light.

Where is the P0670 sensor located? 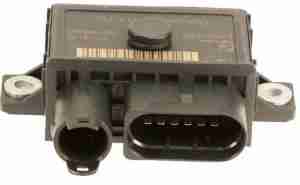 The image above shows a typical glow plug control module, but note that the actual appearance of these modules vary greatly between applications.

If a manual for the affected application is not available for the purpose of identifying and locating the glow plug control module, one other way to locate the module is to locate the glow plugs on the cylinder head(s), and then to trace the leads back to the control module(s). Note that since glow plugs and their leads resemble spark plugs and spark leads, finding the glow plugs in a crowded engine compartment can me made easier if one looks for parts that look like skinny spark plugs that are screwed into the cylinder head(s).

Some common causes of code P0670 could include the following-