OBD II fault code P0657 is most commonly defined as “Actuator Supply Voltage “A” Circuit/Open” and is set when either the PCM (Powertrain Control Module) or any other control module detects a break in communication between two or more control modules. Circuit “A” refers to a part of the CAN (Controller Area Network) circuit, rather than a specific circuit, wire, or component. Note that the term “Circuit A” is not always included in the various definitions of this code, but where it is included, “Circuit “A” could mean different things on different applications. Always consult the manual for the application being worked on for detailed information on the exact meaning and correct interpretation of the definition.

The actual number of control modules varies between applications, with some applications having as many as 18, or sometimes more. Typical control modules that are linked by the CAN system include the following, but are not necessarily limited to the-

Although this example is a gross over-simplification of the CAN system, it should suffice to illustrate the complexity of the system. However, to complicate matters further, each control module is programmed with a set of messages it expects to receive from other control modules. Thus, when a particular control module does not receive an expected signal, or when a particular control module detects a break in communication from one or more of the control modules it should be in contact with, a code is set, and in some cases a warning light will be illuminated. Note that some failures will set a code immediately, while others require several fault cycles before setting a code and illuminating a warning light.

The image below shows a hugely simplified representation of the major components and systems that are interconnected by the CAN bus system. Note that systems such as power window control and others that are typically controlled by the BCM (Body Control Module), are not shown here. 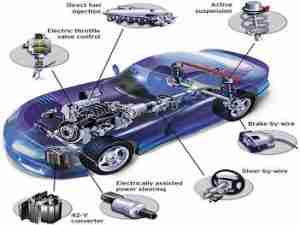 The most common causes of code P0657 are wiring issues that could include burnt, damaged, shorted, or corroded wiring and /or connectors that cause open circuits. Other possible causes could include-

In many cases, the only symptom is a pending code, although on applications that set a code on the first failure cycle, the code will be active, and accompanied by an illuminated warning light.

NOTE: Other symptoms are for the most part make-and-model specific, with the actual symptoms depending on where in the CAN system the fault had occurred. Be aware though that code P0657 indicates a communication failure in the CAN system specifically, meaning that driveability issues and other symptoms are rather the result of the code than the cause of it. Therefore, attempts to resolve the symptoms will not resolve this code.

WARNING: Diagnosing OBD II code P0657 is NOT recommended for non-professional mechanics, because CAN bus systems consist of thousands of circuits, connections, and connector pins that connect a dozen or more control modules. In addition, the system relies on inputs from a host of sensors that are in their turn, connected to the PCM via the CAN bus system with several hundred more circuits. Finding an open circuit in this system is a monumental task that requires a full inspection of the ENTIRE wiring harness, and the individual testing of the above-mentioned thousands of circuits.

NOTE #1: The exact definition of P0657 and the application of that definition must be researched before attempting a diagnosis of the code. Always consult the manual for the application being worked on for detailed information on code P0657 as it applies to that particular application.

NOTE #2: Generic code readers are generally not capable of isolating parts of the CAN bus system; much less identify the most probable part of the system in which the fault had occurred. Diagnosing this code therefore requires professional grade equipment, above average knowledge of automotive diagnostics in general, expert knowledge of the application in particular and at least 40 to 50 hours of diagnostic time.

NOTE #3: While control module failures are relatively rare, it is not altogether impossible for control modules to fail. However, do not assume any control module is defective simply because there seems to be no detectable output voltages from it. Some control modules require very specific conditions to be met before they will generate a signal voltage: conditions that can sometimes not be met because of an open circuit somewhere in the CAN system.

NOTE #4: What follows below is a brief overview of the procedures involved in diagnosing faults in the CAN bus system, as opposed to detailed instructions on how to repair all, or even most, possible faults on all applications.

NOTE: There may be many fault codes present along with P0657, but bear in mind that these codes are almost certainly the result of P0657, as opposed to being the cause. Note that unless the manufacturer specifically states that the battery must be disconnected at some point in the diagnostic procedure, doing so to reset the fault memory is NOT recommended, since this action may set code P1000 – “OBD II Monitor Testing Not Complete.”

If you are confident enough in your diagnostic abilities to undertake a diagnosis of this code, start the procedure by inspecting all visible wiring. Look for obvious signs of damage like burning, chafing, rubbing, or shorted and corroded wiring and/or connectors, but resist the temptation to repair any damage found. In these cases, replacing the relevant section of the wiring harness between connectors is always the better option. Replace wiring as required, clear all codes, and rescan the system to which codes (if any) return.

NOTE: Some open circuits in the CAN system are protected by fuses, so be sure to check all fused circuits with a dedicated circuit tester that can measure resistance as well as system currents. Test lights are useless for testing of this nature, since they cannot measure resistance.

With this in mind, consult the manual for the application being worked on to locate all grounding points on the vehicle, as well as the actual locations of all control modules. Check all ground connections and repair, clean, or retighten connections as required.

NOTE #1: Loss of ground is a common cause of P0657, so be sure to check for engine and body ground straps that may have been left hanging loose during prior repair procedures. Repair or replace ground straps as required, clear all codes, and rescan the system to see which codes (if any) return.

NOTE #2: Bear in mind that restoring one or more grounds will not necessarily clear, or resolve all or even some of the codes present, and especially if code P1000 is present, which is not altogether impossible to happen. P1000 requires very specific conditions to be met before it will clear itself, which conditions can generally only be met by completing one or more drive cycles exactly as specified by the manufacturer.

NOTE #3: Be aware that gaining access to all the wiring on the vehicle to inspect ground connections could involve removal of seats, carpets, trim panels, the dashboard / instrument cluster, and even the roof liner and door panels in some cases. In addition, the insulation must be removed from wiring harnesses to inspect the several hundred splice joints in the harness that can only be accessed by removing the harness insulation. Note that if insulation is to be removed from any harness, extreme care must be taken during the process to prevent causing damage to wiring where there was none before.

If code P0657 (or any other code) persists after having found no visible damage to wiring, or even if after damage had been repaired and the prescribed drive cycles had been completed, the chances of a successful resolution of the problem are very slim. At this point, the car owner is basically faced with only two choices, which are-

WARNING: The alternative to the above choices involves the individual testing each of the thousands of circuits that make up the CAN system, which is a mammoth undertaking that has huge potential to cause extensive additional, (and always-expensive) damage to the vehicle’s electrical system. Be aware that one misplaced probe or accidental short circuit could easily destroy several control modules, and/or large sections of wiring, which in turn could erase all the data on the PCM and/or other control modules.

Additionally, it must be borne in mind that some sort of memory saving device must be used to keep individual control modules powered up while testing that module’s circuits. This procedure is a major challenge in itself, and failure to follow the directions in the manual exactly could damage, or erase the data on some control modules.

NOTE: Although code P0657 is a generic code that is most commonly defined as “Actuator Supply Voltage “A” Circuit / Open”, some manufacturers have assigned vastly different meanings to the definition. Below are some examples of different interpretations of this code, but take note that still others may exist.

A maruti swift dzire 2014 starting problem at early morning or in cold condition, DTC shown but no SVS light shown on IP. What is the probable cause.

This DTC refers to an ECM fault. Check and address any fuse problems or obvious wiring faults. Mke sure the ECM hasn’t been damaged. Make sure the battery is at least 12.6 V at rest and 13.5 V while running. You may need to take it to the dealership service center to see if the ECM is the correct one for your vehicle and doesn’t require any updates or hasn’t suffered an internal fault. Have you tried clearing codes and seeing if it comes back?

P0657 – Found the earthing switches wire from PCM (pin 123) to ETV relay deactivated once the engine started in few seconds. MIL activated. All relay wires conformed including ETV wires to PCM. No related DTC and CAN diagnostic is Okay/Good.
PCM, ETV, Relays, APS, AFS are conformed OK (swapped from other the same model vehicle) in and out Fuses are OK.
The owner can’t afford new engine wirings. PIN 123 wire from PCM to ETV relay Okay but I run other wire to the same circuit 123 but having the same problem once engine started.
Anyone can Advice please.