SPECIAL NOTES: Non-professional mechanics should take note that although code P0639 “Throttle actuator control, bank 2 -range/performance problem” is sometimes repairable on a DIY basis, this code is often the result of failures, malfunctions, or defects in the CAN (Controller Area Network) bus system that may not be directly related to the throttle actuator.

In simple terms, the CAN system can be thought of as a sort of intranet that connects the sometimes-several dozen control modules that control every imaginable electrical function on a modern vehicle. To complicate matters, this system is composed of literally thousands of circuits that are interconnected by tens of thousands of connections in an incredibly complex system that most generic code readers cannot access. The net result of this is that in some cases, code P0639 may be the only code a generic code reader can display, when in fact, there may be other CAN system related codes present that cannot be displayed.

In such cases, code P0639 may only be the result of other, inaccessible codes, which means that if the few generic diagnostic/repair steps outlined in this guide do not resolve code P0639, the wisest option would be to refer the vehicle to the dealer, or other competent repair shop for professional diagnosis and repair.

In light of the above, non-professional mechanics should take note that this guide cannot provide detailed diagnostic and repair information for this code, other than a few generic steps that may, or may not resolve code P0639. In the event that the information provided in this guide does not resolve P0639, suspect a more serious failure, malfunction, and/or defect in the CAN bus system. END OF SPECIAL NOTES.

OBD II fault code P0639 is a generic code that is defined as “Throttle actuator control, Bank 2 -range/performance problem”, and is set when the PCM (Powertrain Control Module) detects a problem with the operation of the throttle control actuator on drive-by-wire systems. In this definition, “range/performance problem” refers to the fact either that the throttle control actuator does not perform as expected given a particular set of operating conditions, or, that the actual throttle position does not agree with the desired throttle position given a particular set of operating conditions. “Bank 2” refers to the bank of cylinders that does not contain cylinder #1 on engines with two cylinder heads.

Note that on some applications, as many as eight failure cycles need to occur before the PCM will store a trouble code and illuminate a warning light.

On systems that use drive-by-wire technology, there is no physical link between the accelerator pedal and the throttle, and throttle control on these applications is accomplished with a stepper motor that is “instructed” by the PCM to open or close the throttle, using input data from several control modules, which might include the following-

On some applications, there may be other control modules involved, but in all cases, the process of controlling the throttle starts when the driver depresses the accelerator pedal. A position sensor in the pedal assembly communicates both the position of the pedal, and the rate at which the pedal is being depressed. This basic information is transmitted to the PCM via the CAN bus system, but also to all other affected modules (see list above). Moreover, this information is also shared between all affected modules and the PCM via feedback circuits to ensure that all affected modules that are involved with the safe operation of the vehicle “know” that a throttle input had been made.

If the system is fully functional, several things may or may not happen when the throttle request is received. For instance, if the application has an automatic transmission, the PCM may instruct the unit to down shift, depending on the amount of throttle required. On the other hand, if the application is fitted with an adaptive cruise control system that is activated at the time of the throttle request, and other vehicles are in close enough proximity, the proximity control module might cause the throttle not to respond, or the brakes might be applied autonomously in order to avoid a potentially dangerous situation from developing.

From the above it should be clear that a simple throttle input sets in motion a complex chain of communication between affected modules, which communications ultimately determine whether the throttle input is allowed or not. It should also be obvious that failures, malfunctions, and/or defects in parts of the CAN bus system that are not directly related to the throttle control actuator can cause P0639 to be set.

The image below shows a typical wear pattern on the drive-gear teeth in a throttle actuator that can cause “range/performance” related codes to be set, due to the excessive free play between gear teeth. While this type of problem can be corrected simply be replacing the throttle actuator, diagnosing some types of electrical causes of this code requires the use of dealer-grade diagnostic equipment. 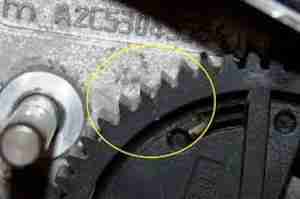 Common causes of code P0639 could include the following-

Common symptoms of code P0639 could include the following, but take note that the severity of one or more of the symptoms listed here may vary between applications-

SPECIAL NOTES: Non-professional mechanics should take note that even if no other codes are displayed on a generic code reader, the presence of P0639 might very well be the result of a failure elsewhere in the CAN system, which faults and failures can almost invariably not be diagnosed with generic equipment. Diagnosing CAN bus faults requires the use of dealer-grade diagnostic equipment, comprehensive reference data, above average diagnostic skills in general, and expert level knowledge of the application in particular, all of which is generally not available to non-professional mechanics. END OF SPECIAL NOTES.

NOTE: Bear in mind that if this code is displayed as a “pending” code, several more fault cycles need to occur before the code becomes “active”, and a warning light is triggered. However, this does not mean that the code can be ignored since there may already be “active” CAN bus related faults present that cannot be displayed on a generic scanner. All instances of this code, regardless of whether the code is “active” or “pending” MUST be investigated, and a repair MUST be attempted to prevent or reduce the possibility of aggravating a condition such as an underlying CAN bus fault that may not be immediately apparent.

Refer to the manual to locate the throttle actuator, as well as to determine the location, function, routing, and color-coding of all associated wiring.

Perform a thorough visual inspection of all associated wiring and connectors. Look for damaged, burnt, shorted, disconnected, or corroded wiring and/or connectors, and make repairs as required if any damage is found. Clear the code after repairs are complete, and operate the vehicle for at least one complete drive cycle before scanning the system again to see if the code returns.

If the code persists, prepare to perform reference voltage, ground connectivity, resistance, and continuity checks on all wiring. Be sure however to disconnect the throttle actuator wiring from the PCM to prevent damage to the controller during this step.

Also, be sure to follow the directions to perform these checks provided in the manual exactly to prevent the possibility of obtaining incorrect or misleading test results, and especially on the throttle actuator position switch’s signal circuit. For instance, an abnormal resistance between the position switch and the PCM could cause the PCM to “see” an implausible position for the throttle plate, which will almost certainly set code P0639.

Compare all obtained results with the values stated in the manual, and should discrepancies be found, replace wiring, as opposed to repairing wiring, to ensure that all electrical values fall within the manufacturers’ specifications

WARNING: Note that both the stepper motor and the position switch form part of the control circuit, and as such, these components must be tested as well. Refer to the manual for detailed information on the correct procedure(s) to follow to test both components. Typically, the internal resistance(s) of these components are good indicators of their serviceability (or otherwise) so replace any and all components whose internal resistance does not agree with the manufacturer’s specifications.

Remember though that since this code involves throttle control, “close enough” is NOT good enough. All electrical values must match specified values exactly, or very nearly so. Sloppy diagnostic work during this step is risking the unexpected, and quite possibly, the complete loss of throttle control, which could have dire consequences.

Clear the code after repairs are complete, and operate the vehicle for at least one complete drive cycle before scanning the system again to see if the code returns.

If the code persists, but all electrical values fall within specified ranges, suspect a defective throttle actuator, or the presence of carbon deposits that could inhibit or prevent the free movement of the throttle plate.

Remove the throttle body from the inlet tract, and inspect it for obvious mechanical defects and/or the presence of carbon deposits. If no obvious defects are present, remove all carbon deposits with an approved solvent. Note that more than one application of the solvent may be required to remove stubborn deposits.

If the scanner has control functions, reconnect the wiring on the throttle body, and use the scanner to command the actuator to rotate the throttle plate from the fully closed, to the fully open position multiple times to check for the presence of intermittent electrical faults.

Take careful note of the values displayed on the scanner during this step. Some scanners will display the position of the throttle plate in degrees of rotation, while others will display this as a percentage of opening, but regardless of this, the fully closed and fully open position values should be the same, or very close (within a percentage point/degree or so) to the values stated in the manual. If these values do not agree, replace the position sensor, and repeat this step.

Also, replace the throttle body/actuator assembly as a complete unit if the mechanism does not move freely, or there are any signs of binding, sticking, or erratic movement of the throttle plate.

NOTE #2: If the scanner does not have control functions, consult the manual on possible workaround methods to test the operation of the throttle actuator. However, if the manual does not explicitly describe a method of applying a direct current to the throttle actuator for the purpose of testing the unit, do NOT apply a direct current to ANY terminal or pin in the connector. Doing this could cause extensive damage to the electrical system and/or one or more control modules.

If however, the code returns immediately, there are two possibilities to consider. The first is that an intermittent fault might be present, and the second is that the fault might be buried deep inside the CAN bus system. In both cases, the wisest course of action would be to refer the vehicle to the dealer, or other competent repair shop for professional diagnosis and repair.