Although all definitions of P0628 apply to low fuel pump control circuit voltages in some way, the testing procedures for this code vary greatly between diesel and gasoline applications. This is particularly true when code P0628 is present on a gasoline application that uses a return-less fuel system, as opposed to a constant pressure system that bleeds off fuel pressure with a pressure regulator.

Some (common) possible definitions of P0628 could include the following-

Note however that other definitions are possible, depending on the make and model of the application involved, as well as the production year of the affected application. Therefore, every attempt MUST be made to confirm the definition of P0628 as it relates to the application being worked on to prevent confusion, misdiagnoses, and the unnecessary replacement of expensive parts and components.

From the above, it should be obvious that this guide cannot provide detailed diagnostic/repair information that will be valid for all applications under all possible conditions, which means that the generic information provided here is intended for general informational purposes only, and it must therefore NOT be used in any diagnostic procedure for code P0628 without making proper reference to the application being worked on. END OF SPECIAL NOTES.

OBD II code P0628 is a generic code that is most commonly defined as “Fuel Pump “A” Control Circuit – Low” (which definition applies to most gasoline applications), and is set when the PCM detects an abnormally low voltage in the fuel pump control circuit. On most applications, code P0628 sets, and a warning light is illuminated immediately after the fault occurs although in some cases, the code will only set after the fault has been present for a number of seconds.

On older gasoline applications, the fuel system is designed so that fuel is delivered to the injectors at a constant rate and pressure. On these systems, power is supplied to the fuel pump via a relay that delivers close to battery voltage to the pump, which always runs at a constant speed, thus delivering fuel at a volume and rate that ensures that the engine is always supplied with an adequate supply of fuel, regardless of the operating conditions at any given moment.

To control both the volume and pressure of the fuel at levels that do not cause over fuelling, the fuel rail is fitted with a spring-operated pressure regulator that opens under the fuel pressure delivered by the pump when the demand for fuel drops, such as when the throttle is closed. In this way, the injectors are always supplied with sufficient fuel at the pressure specified for the application, but excess pressure is diverted back to the tank through the pressure regulator when fuel demand drops. This type of system is also fitted with a fuel pressure sensor that monitors the system for both abnormally low-, and high-pressure conditions.

On the other hand, modern applications are increasingly using “returnless” systems that do not return excess fuel to the tank. Instead, the volume and pressure of the fuel delivered to the injectors is controlled by varying the speed of the fuel pump, which is accomplished by inducing voltage drops in the control circuit. One major advantage of these fuel system designs is that since the fuel is not agitated, or heated as much as on older systems, the volume of fuel vapors is greatly reduced, which is great from an emissions perspective.

However, the downside of these systems is the greatly increased complexity of the fuel pump’s control system, which includes control modules and sensors that are not included in the control systems of constant-pressure systems. For instance, a typical returnless system incorporates one or both accelerator pedal position sensors, the throttle position sensor(s), input from the MAP/MAF (Mass Airflow/Manifold Absolute Pressure) sensors, data from engine coolant and intake air temperature sensors, the fuel pressure sensor, and several others that are all interconnected via the CAN (Controller Area Network) bus system.

The PCM uses all of this input data to calculate an appropriate fuel pressure that on the one hand, ensures that the engine is not starved of fuel, and to ensure that the injectors squirt the correct volume of fuel into the cylinders on the other, which can exceed the desired volume if the fuel pressure is too high at any given moment. To get this balance right, the PCM adjusts the speed of the fuel pump several times per second by varying the fuel pumps’ input voltage. There are various ways of accomplishing this, but the most common method entails varying the resistance in the fuel pumps’ power supply to either increase, or decrease, the voltage that ultimately reaches the pump motor.

Thus, from the above it should be clear that verifying a low voltage fault or condition in the power supply of a constant-pressure system involves nothing more than measuring the resistance and continuity in the fuel pumps’ wiring. However, since returnless systems use a varying voltage/resistance to control the pump speed, it is less easy to determine at which point in the pump’s operating range the low voltage condition set code P0628, and illuminated a warning light. Nonetheless, in both designs, the PCM will set code P0628, and illuminate a warning light when a low voltage condition is detected in the fuel pumps’ control circuit.

The image below shows a simplified schematic of a typical return-less fuel injection system. Note the absence of a fuel pressure regulator, which has the function of diverting excess pressure back to the fuel tank on constant-pressure systems. 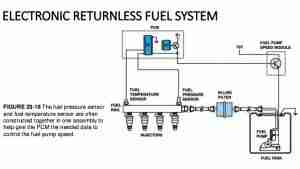 Common causes of P0628 could include the following-

Failed or failing PCM, or fuel control module, which may or may not include the fuel pump speed control module.  Note however that these are rare events, and the fault must be sought elsewhere before any controller is replaced.

Apart from a stored trouble code and an illuminated warning light, some other common symptoms of P0628 could include the following-

NOTE: Take note that most, if not all of the symptoms listed here also apply to diesel applications that display code P0268.

SPECIAL NOTES ON DIESEL LIFT PUMPS: Although diesel lift pumps perform a different function than the fuel pumps on gasoline engines, the diagnostic/repair procedures for code P0628 on diesel applications are much the same as for code P0628 on gasoline applications. In both cases, the pump requires a specific voltage to function correctly, and apart from the fact that diesel lift pumps produce much lower pressures than gasoline fuel pumps do, a lower than expected input voltage may cause the pump not to deliver the correct volume of fuel at the specified pressure, which in turn, may starve the main injection pump of a steady supply of fuel. Thus, by following the diagnostic/repair steps outlined in this guide, it should be possible to resolve code P0628 on diesel applications nine times out of every ten. END OF SPECIAL NOTES.

Refer to the manual for the application to determine whether the fuel system is of the constant-pressure, or returnless variety, since the diagnostic procedure for the latter type of system is a little more complicated than for the former type.

Regardless of the type of system though, the vast majority of failures occur in the wiring between the fuel pump relay, and the fuel pump itself. With this in mind, refer to the manual to identify all relevant components, wiring, and connectors, as well as the color-coding, and function of each wire in the control circuit.

Once all wiring and components are identified, perform a thorough visual inspection of all wiring; look for damaged, burnt, shorted, disconnected, and corroded wiring and/or connectors. Make repairs as required, clear all codes, and rescan the system to see if the code returns.

If the code persists, but no visible damage is found in the associated wiring, prepare to perform resistance, continuity, and ground connectivity checks on all associated wiring. On constant-pressure systems, this is relatively easy since the circuit is very simple. However, pay particular attention to continuity across all connectors, and be sure to check that the pump relay coil displays the specified resistance.

On this type of system, the control circuit should carry battery voltage, or very close to it, so be sure to check that the battery is fully charged when this check is performed. Also, check that the system ground is good by testing between the battery positive and suitable ground points on both the bodywork and the engine. Make repairs if required to ensure that the system ground is restored.

Be absolutely sure to check for short circuits between the positive and negative sides of the control circuit. All manufacturers have maximum allowable limits for voltage in the ground circuit, and while the ideal is to have no voltage in this circuit, it does sometimes happen that some voltage is present due to a variety of causes and factors. If excessive voltage is found, it is sometimes preferable to replace all relevant wiring than to spend hours looking for a marginal short circuit between ground and battery voltage.

Nonetheless, compare all obtained readings with the values stated in the manual and make repairs as required to ensure that all electrical values fall within the manufacturers’ specified ranges. Clear all codes after repairs are complete, and rescan the system to see if the code returns.

NOTE: If the code persists on a constant-pressure system, ensure that the fuel pump relay is fully serviceable, since the contact points inside electro-mechanical relays can sometimes inhibit current flow if the points are damaged due to long use, or arcing. Replace the fuel pump relay if there is any doubt about its condition or serviceability.

The diagnostic/repair steps up to, and including, Step 5 will almost certainly resolve P0628 on both constant-pressure gasoline fuel systems, and diesel lift-pump systems.

However, if the fault persists beyond Step 5 on a returnless system, it becomes necessary to test all circuits and components in the fuel pump’s entire control system, since the entire system is involved in calculating and delivering the supply voltage that is ultimately sent to the fuel pump at any given moment. Typically, these tests involve testing the operation of all implicated sensors and control modules, as well as the resistance, reference voltage, continuity, and ground connectivity in all associated wiring and circuits.

Be aware though that this procedure can be extremely challenging even for professional technicians, and it should therefore NOT be attempted by non-professionals who are not comfortable with the idea of diagnosing faults in a CAN system, or who do not have access to suitable diagnostic equipment, all relevant reference data, and/or the required diagnostic skills.

Other typical tests involve checking both the fuel pump’s control circuit voltage and the actual fuel pressure at set throttle openings. While this can be done with some scanners that have control functions, this procedure is NOT recommended if suitable equipment and reference data are not available. In fact, if Steps 1 to 4 did not resolve the problem, the wiser option is to refer the vehicle to the dealer or another competent repair shop for professional diagnosis and repair.

[…] Before you star throwing parts and money at it first understand the many problems it could be signaling. P0628 – Fuel pump control -circuit low – OBD2 Trouble Codes […]