In a fully functional system, the alternative fuel control module is just one of dozens of control modules that are all interconnected via an exceedingly complex web of harnesses that collectively, form the CAN (Controller Area Network) bus system. During normal vehicle operation, information about a given aspect of the current operating conditions is distributed to all control modules that are involved with regulating/monitoring that particular aspect or function via the CAN bus system.

In practice (on an application that uses more than one type of fuel), the PCM is continually supplied with input data from a variety of sensors such as engine temperature, engine speed, throttle position and others. When the PCM determines that all required conditions have been met, it will switch over to the alternative fuel supply, at which time the Alternative Fuel Control Module will assume control of the application’s fuelling requirements, using the learned data values/operating parameters stored in the Alternative Fuel Control Module’s Keep Alive Memory.

However, should the PCM detect that the Keep Alive Memory relating to the Alternative Fuel control Module has failed, or is damaged in any way it will set code P0618, and depending on the application, may also illuminate a warning light. Note however, that on some applications, up to eight failure cycles need to occur before the PCM will illuminate a warning light. In these cases, code P0618 will be stored as a “pending code”, until the required number of failure cycles have occurred.

Where is the P0618 sensor located?

Both the Alternative Fuel Control Module and its associated Keep Alive Memory are integrated into the PCM, and are therefore not user-serviceable. The image below shows the typical corrosion damage that can occur to a PCM printed circuit board when a vehicle is flooded. Note that this type of damage is also common on vehicles that have a history of water leaks into the passenger cabin. 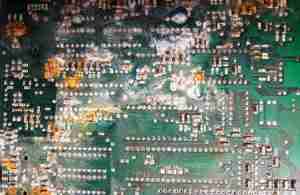 Some common causes of code P0618 could include the following-

Due to the many variables involved in this code, it is not possible to provide a repair cost estimate that will be valid for all, or even most instances of this code.

Some common symptoms of code P0618 could include the following-

What are common solutions to code P0618 ?

Common solutions to code P0618 include the following-

Code P0618 should be considered as serious, since some of the drivability issues, such as harsh or unpredictable shifting that often accompany this code can cause serious damage to the transmission and other major components.

Ideally, a vehicle on which code P0618 is present should not be driven until the code is resolved, since symptoms such as a sudden loss of power can occur unexpectedly. This poses an obvious safety risk, especially when the affected vehicle is driven in heavy traffic.

Non-professional mechanics should note that code P0618 is not repairable on a DIY basis, unless the cause of the code is obvious, such as visibly damaged wiring, loose or corroded battery terminals, or a PCM that is confirmed to be defective.

NOTE: In cases where the cause of code P0618 is not obvious or immediately apparent, the average non-professional mechanic is limited to a few generic repair/diagnostic steps that may or may not resolve the problem. Therefore, if the few steps outlined here do not resolve the issue, the better option is to refer the application to the dealer or other specialist repair facility for professional diagnosis and repair. Note that professional diagnostic steps could include using advanced diagnostic equipment to isolate faults in the CAN bus system, removal and replacement of large sections of the vehicle’s wiring, or replacement and/or reprogramming of one or more control modules.

What are the common mistakes when repairing code P0618 ?

The most common mistake(s) made when dealing with code is a failure to resolve additional codes (where present) in the order in which they were stored. P0618 often sets as a result of other failures, malfunctions, or faults and failing to address the root cause(s) of P0618 effectively will result in an ineffective repair.

However, it must be borne in mind that code P0618 can also cause other codes to set. Thus, in cases where P0618 appeared first, it must be resolved before any other additional codes are addressed.

WARNING:  In cases where code P0618 is shown as “pending”, it is vitally important NOT to disconnect the battery, clear ANY codes, or to disconnect control modules and/or electrical connectors (including ground straps/wires) in a random fashion. Doing any of the above will almost certainly ERASE or OVERWRITE Failure Records that may have been saved along with freeze frame data that relate to additional codes.

NOTE: If the vehicle is fitted with a performance-enhancing chip in the PCM, or if the PCM is running on enhanced programming (authorized or not), restore the original programming as a first step in resolving P0618, since running non-stock programming is a common cause of this code.

Record all codes present (including pending codes), as well as all available freeze frame data/Failure Records. All additional codes that are present MUST be resolved in the order in which they were stored, but note that where P0618 was stored first, all other following codes have set as a result of P0618. In these cases, P0618 must be resolved first.

NOTE: Refer to the manual for details on the relationship between additional codes and P0618. Pay particular attention to codes that relate to abnormal system voltages and/or the charging system, and be sure to resolve these codes BEFORE continuing with the diagnostic repair procedure to prevent a recurrence of the problem.

In the unlikely event that there are no additional codes, perform a thorough visual inspection of all visible and accessible wiring, starting with the battery cables, and the battery itself. Look for visibly damaged, shorted, disconnected, or corroded wiring and/or connectors.

Note that abnormal system voltages and intermittent failures of the PCM’s power supply are the two most common causes of this code. Therefore, it is important to verify that the battery is fully charged, and that the battery terminals are free of corrosion and properly tightened. Include an inspection of all battery grounding points in this inspection. Make repairs as required before clearing all codes and scanning the system again to see if any codes return.

NOTE: Faults relating to abnormal system voltages and/or the charging system are invariably indicated by dedicated codes. If no such codes are present, it is reasonably safe to assume that the root cause of the code does not involve the charging system.

If no visible damage to wiring (including the battery cables/terminals) is found, and it is certain that the charging system is in perfect working order, refer to the manual to locate the PCM, and inspect it for signs of corrosion or other outward signs that the unit had been in contact with water or moisture.

This is especially important if the vehicle had been flooded at any time in the past, or if it has a history of water leaking into the passenger cabin. This inspection is even more important on applications where the PCM is located in the engine compartment, or anywhere else outside of the passenger cabin. On these applications, it is vitally important to verify that the PCM had not been in contact with water, or that water cannot come into contact with the PCM or find its way into the PCM’s electrical connector.

If it turns out that the PCM or its connector had been in contact with water, there is a more than even chance that a fatal short circuit had destroyed the Alternative Fuel Control Module’s Keep Alive Memory.

However, short circuits of this nature do not destroy PCM circuits in a selective manner, and there is therefore a distinct possibility that other features/circuits in the PCM are damaged or destroyed as well, particularly in cases where a no-start condition is present.

Diagnosing this code beyond Step 4 involves the individual testing of hundreds, if not thousands of circuits, as well as dozens of control modules in a process that can take several days, even for highly skilled technicians that have access to advanced diagnostic equipment and the latest technical information.

Thus, if Steps 1 through 4 did not resolve the problem, suspect either a wiring issue that can be located almost anywhere in the CAN bus system, or one or more defective/malfunctioning control modules. Non-professional mechanics are therefore strongly urged NOT to continue the diagnostic procedure, but to refer the application to the dealer or other competent repair facility for professional diagnosis and repair, instead.