OBD II fault code P0598 is a generic code that is defined as “Thermostat Heater Control- Circuit Low”, and is set when the PCM (Powertrain Control Module) detects an abnormally low voltage in the control / signal / feedback circuits of the electrically operated engine thermostat. Note that this code (and closely related codes P0597, P0598 and P0599) only applies to small number of manufacturers that include BMW, Mercedes, Jaguar, Mini, Opel, and a few VAG-group makes including Audi and VW, and then only on some models.

Unlike conventional thermostats that control and regulate the temperature of engine coolant within a narrow range, electronically controlled thermostats have the advantage that the engine’s temperature can be controlled to suit different operating conditions.

In practice, the temperature of the engine has a direct bearing, and therefore a major influence on the combustion process. For instance, when the engine is cold, it is comparatively difficult to combust an air/fuel mixture completely, so the PCM adjusts the fuel delivery and ignition timing strategies to achieve near-total combustion. While these adaptations work well, the downside is decreased fuel economy and increased emissions until the engine coolant reaches a pre-defined temperature.

Conversely, combustion becomes easier if the engine is hot, since the air/fuel mixture is partially heated by the already hot cylinder. In addition, since the spark plugs are also already hot it is easier for the ignition spark to jump across the gap between the electrodes, which results in a more even ignition of the compressed air/fuel mixture.

Thus, based on the relationship between the engine temperature, how well (or otherwise) the air/fuel mixture combusts at different engine temperatures, and emission levels at different engine speeds/loads, the PCM continually regulates the flow of the engine coolant with an electronically controlled thermostat to suit different operating conditions. In a fully functional system, the practical advantages of this is that PCM can alter the engine’s temperature in near-real time to ensure that combustion is always complete (or as close as possible to complete), regardless of the engine’s temperature, which improves power delivery and fuel economy, while reducing emissions at the same time.

Nonetheless, when the PCM detects an abnormally low voltage in the thermostat’s control/signal/feedback circuits, it recognizes that it cannot control the engine temperature effectively, and will set code P0598 as a result. Note that on some applications, two or more failures are required before the PCM will illuminate a warning light.

Where is the P0598 sensor located? 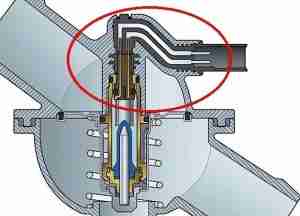 The image above shows a schematic diagram of a typical electronically controlled thermostat, with the heating element and associated wiring connector circled for clarity.

It must be noted that unlike conventional thermostats that are almost invariably attached directly to the cylinder head, electronically controlled thermostats are not always located on, or close to the cylinder head. For this reason, it is important to refer to the repair manual for the affected application to locate and identify the thermostat correctly. However, if a repair manual is not available, simply follow the radiator hoses back to the engine; at least two coolant hoses will always be attached to the thermostat housing, which can be identified by the fact that an electrical connector is attached to it.

Some common causes of could P0598 could include the following-