OBD II fault code P0522 is a generic code that is defined as “Engine oil pressure sensor/switch -low voltage”, and is set when the PCM (Powertrain Control Module) detects either an actual low oil pressure condition, or a low voltage in the oil pressure switch and/or its control circuit.

In practice, the PCM in any given application is programmed to recognize a range of signal voltages (that roughly correspond to actual oil pressure(s)) that represent the acceptable oil pressure range for that application. Thus, when the PCM detects a low signal voltage, that by extension could indicate an abnormal oil pressure, it will set code P0522, and illuminate a warning light.

NOTE: When code P0522 occurs on some applications, the PCM may set also set code P2105 – “Throttle Actuator Control System – Forced Engine Shutdown”, which means that the PCM has initiated a forced shutting down of the engine to protect the engine. Be aware that when codes P0522 and P2105 appear together, it may not be possible to restart the engine until code P0522 has been resolved. 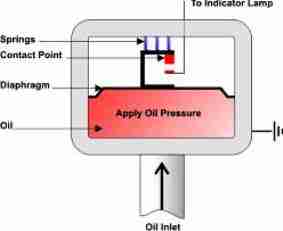 Some typical causes of P0522 could include the following-

Typical symptoms of code P0522 could include the following-