P0510 is a generic code trouble code with the definition “Closed Throttle Position (CTP) switch  – circuit malfunction.”  Typically, P0510 is triggered by an open or short in the CTP sensor or a closed throttle position switch that does not engage when the vehicle is in motion. The effect is that when there is a failure of the throttle to engage, the PCM cannot tell the exact position of the throttle and may assume that it is wide open. This will cause the sensor to send the wrong air/ratio to the PCM, triggering the code.

To properly troubleshoot this trouble code, begin by checking for openings in the harness or ECM. Make sure that there is a good connection to the sensor. If it’s good, the problem may be the sensor, and it will need to be replaced.

Next check the wiring connection between the TPS and the ECM, inspect the wiring properly and repair all broken connections. The ECM may be damaged and need replacement and reprogramming in worse cases.

Where is the P0510 sensor located? 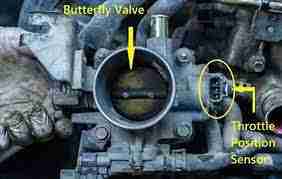 The throttle body is located between the air intake and the intake manifold. There is a throttle plate in the throttle body, which is a butterfly valve. This controls the airflow and is directly responsive to the pedal motion. Once the pedal is pushed down, it will open up and let air into the engine.

The P0510 code is caused by anything affecting the throttle plates. The most obvious reason for the code is associated with the Closed Throttle Position (CTP) switch and the Throttle Position Sensor (TPS). Below are some of the causes of the code.

The code comes with some noticeable symptoms which would require immediate attention. In most cases, you will first notice reduced engine power due to air restriction in the engine system. Other symptoms will follow, which could include the following:

There are notable codes that come up with the P0510, some of which include the following:

The P2119 trouble code is an OBDII code that means Throttle Actuator Valve Range/Performance Problem. When the Powertrain Control Module (PCM) detects that the Throttle is out of position, this code comes up. It also indicates that the throttle control system has failed.

The P0122 trouble code is another code that may come up with the P0510 code. It means Throttle Position Sensor/Switch A Low Circuit Input. This code will come when the PCM detects that the TPS is not sending the right signals. It usually occurs when the throttle valve Position sensor A gives out a lower voltage than expected.