OBD II fault code P0505 is defined as “Idle Control System Malfunction”, or sometimes as “Idle speed control (ISC) system –malfunction”, and is set when the PCM (Powertrain Control Module) is unable to control, or maintain the engine idling speed at a specified RPM. Note that regardless of slight differences in the wording of various definitions of code P0505, this code always refers to the PCM’s inability to maintain or control the engine idling speed.

On most applications, the PCM will attempt to make adjustments to various systems such as fuel trim, ignition timing, injection pulse width and others in attempts to maintain the specified idling speed and quality. However, PCM’s generally have a rather limited ability to correct or compensate for most faults, and when this limit is reached the PCM will set code P0505 and illuminate a warning light.

Idling speed on gasoline engines is regulated and controlled by the idling control valve (generally located on the throttle body) that allows air to enter the engine by by-passing the throttle plate, which is for all practical purposes kept almost closed by the PCM during idling. A sufficient supply of air to the engine during idling is accomplished by an idling control valve that is operated by a step motor that adjusts the amount of air entering the engine in small increments or “steps”, hence the term “step motor”. Increments are determined by the PCM, and are based on information obtained from several sensors scattered around the engine. Typical information used by the PCM to control the idling speed include-

As long as the throttle plate remains closed, the idling speed and quality is controlled by the PCM via the idle control valve, and as can be seen from the above it should be clear that idle control on a gasoline engine is a complex affair. For instance, if the engine is started in sub-zero temperatures, the PCM will command the idling control valve to allow less air to enter the engine to enrich the air/fuel mixture to create a condition which is roughly analogous to how chokes worked on carburetted engines to control idling in cold weather.

As the engine heats up and combustion becomes easier and more complete, the PCM will command the idling control valve to increase the amount of air entering the engine to suit the changing conditions. However, when the load on the engine changes, say, when some electrical consumers or other systems are either turned on or off, the PCM adapts the signal voltage to the idle control valve to ensure that the idling speed remains stable, and at the RPM specified by the manufacturer.

One example of this would be when an automatic vehicle in placed in gear. To prevent the added drag from the torque converter and transmission from reducing the idling speed, the PCM will command the idle control valve to allow more air to enter the engine, while at the same time, adjusting the injector pulse width to inject more fuel to suit the increased amount of air. Note that the idle air control valve is closed by the PCM when the throttle plate is opened to prevent excess air from entering the engine. 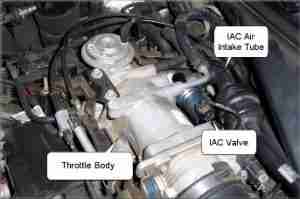 What are the common causes of code P0505?

Although carbon build-up in the throttle body and/or idle control valve air passages is by far the most common cause of code P0505, other possible causes could include the following-

NOTE: The idle control system on some GM products, most notably Dodge vehicles from the late 1090’s to early 2000’s, is particularly susceptible to damage caused by a defective charging system and/or low battery voltage. On these applications, a thorough inspection and testing of the entire charging system should always be the first step in diagnosing code P0505.

The symptoms of code P0505 are much the same for all applications, although the severity of one or more symptoms may vary between applications. Typical symptoms could include the following-

How do you troubleshoot code P0505?

NOTE #1: In many cases of code P0505, the problem can be resolved simply by cleaning out accumulated carbon deposits on, or in the throttle body and auxiliary air passages with an approved cleaner. Take note though that unapproved cleaning agents and chemicals can often damage internal surfaces and/or internal components.

NOTE #2: Defective alternators and/or batteries can have unpredictable effects on most applications, including generating random fault codes and damage to controllers. Since the idle control system is often one of the first systems to sustain damage caused by defective charging systems, it is important to check the condition, and functioning of the charging system before starting a targeted diagnostic procedure on the idle control system.

NOTE #3:  Be aware that some cheap generic code readers either cannot access the dedicated idle control diagnostic system that some manufacturers use to make diagnosing idle control system faults easier, or are not programmed with the dedicated software.  If a professional grade scanner is not available, the better option is to refer the vehicle for professional diagnosis and repair.

NOTE #4: Code P0505 is sometimes accompanied by several other engine codes and it is not always easy to determine if all, or some of the additional codes are the cause, or the result of code P0505. Thus, when diagnosing code P0505 and other codes, especially misfiring and vacuum system-related codes are present follow the rule that states that codes must be resolved in the order in which they were stored. Not doing this will almost certainly result in a misdiagnosis and a lot of wasted time.

If other codes are present along with P0505, diagnose and resolve them in the order in which they were stored. The most likely additional codes are usually vacuum system-related, so inspect the vacuum system for leaks caused by split, dislodged, hardened, or perished vacuum lines. Make repairs as required, and clear all codes before operating the vehicle. Retest the system to see if any codes return.

When installing cleaned or replacement parts make sure all seals and/or gaskets are replaced as well to prevent vacuum leaks. Double check all vacuum line connections before starting the engine or operating the vehicle. If the code persists, consult the manual to determine the function, color-coding, routing, and location of all associated wiring. Perform a thorough visual inspection of all associated wiring; look for damaged, burnt, shorted, or corroded wiring and connectors.

NOTE: Engine wiring is exposed to higher temperatures than wiring elsewhere on the vehicle, which means that the insulation on engine wiring is far more likely to harden and flake off. This often causes intermittent short circuits, so resist the temptation to repair engine wiring, since merely moving the wiring can cause insulation to crack and split elsewhere. The better option is always to replace engine wiring harnesses with OEM replacements, as opposed to repairing them.

If no visible damage is found on the wiring, perform resistance, ground, reference voltage, and continuity checks on all wiring in the associated circuit(s), but be sure to disconnect the idle control valve and step motor from the PCM to prevent damage to the controller. Compare all obtained readings with those stated in the manual, and replace wiring as required to ensure that all readings fall within the manufacturer’s specifications.

NOTE: Pay particular attention to the resistance of the signal wire between the PCM and the stepper motor, since even small variations from specified values can have serious effects on the step motor. Bear in mind that the step motor works in very small increments, which means that an incorrect resistance can seriously influence the working of the step motor, and therefore the amount of air that enters the engine during idling.

Note that depending on the application, dedicated idle control system diagnostic programs usually give a range of voltages that correspond to degrees of opening of the idle valve, or sometimes as degrees of rotation of the step motor. These readings should match the stated values EXACTLY- if they do not, replace the associated wiring harness with an OEM replacement.

If however, all obtained readings agree with stated values the step motor is defective, and it must be replaced. Bear in mind though that aftermarket replacement parts often do not conform to the quality standards demanded by car manufacturers, which could result in a continual recurrence of code P0505 (and others).  Also, keep in mind that in cases where the actual idle control valve and the step motor are separate components, the better option is always to replace both the motor and the valve.

Clear all codes after all repairs are complete, and operate to vehicle to see which codes (if any) return.  At this point the engine should idle within specification, but if it does not, it is likely that there is an intermittent fault present. Be aware that intermittent faults can be extremely challenging and time consuming to find and repair, and in some cases it might be necessary to allow the fault to worsen before an accurate diagnosis and definitive repair can be made.