Almost all vehicle speed sensors consist of a toothed gear that engages with a drive gear on the transmission output shaft. As the outpus shaft rotates, the driven gear in the sensor drives a reluctor wheel in the sensor. The teeth in the reluctor wheel interrupt a magnetic field as they pass in front of either a permanent or electromagnet, with the interruptions and circuit completions being interpreted by the PCM and other control modules as a wave form that represents an electrical voltage. This voltage is referred to as the “signal” voltage, which changes as the frequency of the wave generated by the sensor changes with speed. 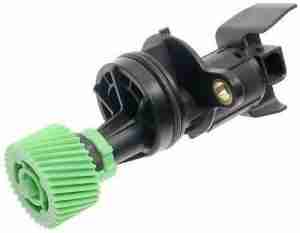 Some common causes of code P0502 could include the following-

NOTE #1: Apart from a digital multimeter and repair manual/wiring diagram for the application, an oscilloscope may be required to diagnose some sensor failures. Thus, if the code persists despite several repair attempts and an oscilloscope is not available, the wiser option would be to refer the vehicle to the dealer or other competent repair facility for professional diagnosis and repair.

NOTE #2: On many applications, it is common for speed sensors to be damaged during routine repairs/maintenance, especially when performing brake repairs or major repairs in the engine compartment. Thus, if code P0502 appears immediately after a repair, suspect a damaged speed sensor on the transmission, or damaged sensors, wiring, and/or connectors near the brakes if brake repairs had been performed.

NOTE: If other codes are present along with P0502, take careful note of the order in which they were stored. It is common for ABS, stability control, traction control, and transmission codes to accompany P0502, so refer to the manual for details on the relationships between P0502 and any other codes that may also be present, but note that codes relating to the systems above that follow P0502 will almost certainly have set as a result of P0502. Bear in mind that codes that precede P0502 must also be investigated and resolved before an attempt is made to diagnose P0502 if the manual call for these codes to be resolved first. Failure to do this will almost certainly result in a misdiagnosis, wasted time, and the unnecessary replacement of parts and components.

Assuming that there are no other codes present, or that additional codes have been resolved, refer to the manual to identify and locate the primary vehicle speed sensor on the transmission, as well as all associated wiring and connectors. Be sure to determine the function, color-coding, and exact routing of all relevant wiring at this point to avoid testing the wrong circuit later on.

Perform a thorough visual inspection of all wiring and connectors. Look for damaged, burnt, shorted, disconnected, and corroded wiring and or connectors. Make repairs, or replace wiring as required.

Clear all codes after repairs are complete, and operate the vehicle normally before rescanning the system to see if any codes return.

If the fault persists but there is no visible damage to the wiring, prepare to perform resistance, continuity, ground, and reference voltage tests on all associated wiring, but be sure to disconnect the vehicle speed sensor from all relevant control modules to prevent damaging one or more modules during this step.

If the sensor requires a 5-volt reference voltage (refer to the manual to determine this), pay particular attention to this circuit. Check this wire’s resistance and continuity between the sensor connector and the CORRECT pin on the PCM connector. If these values check out, refer to the manual on the correct procedure to follow to test whether the PCM is actually delivering a 5-volt current at this connector.  If it does not, replace the PCM. Note however that it is rare for a PCM to fail to deliver the correct reference voltage.

If the reference voltage checks out, compare all other obtained readings with the values stated in the manual, and make repairs or replace wiring as required if deviations from stated values are found.  Clear all codes after repairs are complete, and operate the vehicle normally before rescanning the system to see if any codes return.

On most scanners, the data from the speed sensor will be displayed as numerical values, usually expressed as a speed in m/ph, or as a voltage, or sometimes as both on the same screen. Operate the vehicle at a steady speed and compare the data from the scanner with the reading on the speedometer. However, bear in mind that almost all speedometers over-, or under indicate the vehicles’ actual speed; determine the degree of error before testing the vehicle, and only condemn the vehicle speed sensor if the deviation between the scanner data and the speedometer exceeds this value.

Nonetheless, the object of this test is to see if the vehicle speed sensor delivers a constant voltage/reading at a steady road speed. Thus, keeping official speed limits/restrictions in mind operate the vehicle at a wide range of road speeds; if the scanner input data deviates from the indicated speed by more than the allowable amount at any speed, or if the displayed data fluctuates at a steady  speed, the vehicle speed sensor is defective, and it must be replaced.

Steps 1 through 6 will almost certainly resolve code P0502 on most applications; however, if the affected application uses more than one speed sensor, perform the all of the steps outlined above on all speed sensors until the fault is both identified and repaired or until it becomes clear that these steps cannot resolve the issue.

Since it is likely that the fault might involve the incredibly complex CAN (Controller Area Network) bus system on these applications, an oscilloscope and wave form library may be required to diagnose the fault. If an oscilloscope and relevant reference data are not available, the better option would be to refer the vehicle to the dealer or other competent repair facility for professional diagnoses and repair, since cheap, generic code readers can usually not access the CAN bus system.