OBD II fault code P0497 is a generic code that is defined as “Evaporative emission (EVAP) system -low purge flow”, or sometimes as “Evaporative Emission System No Flow during Purge”, depending on the manufacturer, and/or the source consulted. Nonetheless, both definitions have the same basic meaning, which is that code P0497 is set when the PCM (Powertrain Control Module) detects an EVAP (Evaporative Emissions Control) system purge flow rate that is lower than expected.

While some design specifics vary between manufacturers, the overall design and operation of EVAP systems are similar, in the sense that fuel vapors are collected, stored, and then fed into the engine in a controlled manner when certain conditions demand that the system be purged of vapors, or when purging the system of fuel vapors will not affect engine performance negatively.

With a few exceptions, such as a dedicated leak detection pump on some applications, all EVAP systems consist of the fuel tank, fuel filler cap, a charcoal canister that stores fuel vapors, a vent valve that allows fresh air to enter the canister to help “push” stored fuel vapors from the canister, a purge valve between the canister and the engine that allows fuel vapors to flow into the engine when the valve is opened, various control solenoids, vacuum lines, and pressure and flow sensors.

In a fully functional system, the PCM determines the amount of fuel vapor to be purged, based on input data from various pressure sensors. The PCM also determines the rate at which the fuel vapors must be purged to prevent negative effects on engine performance, and it does this by comparing current operating conditions such as the engine speed and load, throttle position, and other parameters with the rate at which vapors are being purged, which data the PCM obtains from a flow rate sensor.

By comparing the actual flow rate with the desired flow rate, the PCM can control the opening and closing of the purge valve in such a way that the two flow rate values (actual and desired) agree. Thus, when the PCM determines that the flow rate required to purge the EVAP system effectively is lower than expected for whatever reason, it will set code P0497, and illuminate a warning light. Note that on some applications, several fault cycles are required before a warning light is illuminated, while on others, a warning light will be illuminated on the first failure.

The image below shows a simplified schematic of a typical EVAP system. Note the two components circled in red; these are the two most common sites of failures that set code P0497, but be aware that other faults, such as kinked or blocked vacuum lines between the purge valve and the engine can also set this code. Refer to the manual for the application being worked on to locate and identify the various components of the EVAP system on that application before attempting a diagnosis and/or repair of the system to avoid confusion, misdiagnoses, and the unnecessary replacement of parts. 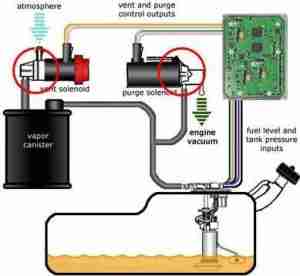 Most common causes of P0497 are much the same across all manufacturers, and these could include the following-

In many instances of code P0497, the only symptom will be a stored trouble code, and possibly an illuminated warning light. However, depending on the application and the exact nature of the problem, there may be other symptoms present, such as-

SPECIAL NOTES: While many online resources, and even some mechanics at repair shops claim that replacing the fuel filler cap, or worse, disconnecting the battery will “clear” or “reset” this code, non-professional mechanics should take note that this “advice” is useless at best, and dangerous at worst.

In the case of defective, loose, or damaged fuel filler caps, the indicated codes will almost invariably refer to “small/large evaporative leak(s) detected”. Code P0497 has nothing to do with the fuel filler cap, or EVAP leaks for that matter; it is solely concerned with lower than expected purge flow rates.

NOTE: Apart from a repair manual for the application being worked on and a good quality digital multimeter, a hand-held vacuum pump fitted with a graduated gauge will be most helpful in diagnosing this code.

Refer to the manual to locate and identify all EVAP system components, as well as the location, function, routing, and color-coding of all relevant wiring and fuel/vacuum hoses.

Once all components, wiring, and vacuum lines are positively identified, perform a thorough visual inspection of the entire system. Look for damaged, burnt, shorted, disconnected, and corroded wiring and/or connectors. Make repairs as required.

If no damage to wiring, connectors, or vacuum lines is found, prepare to perform resistance, continuity, ground, and reference voltage checks on all relevant wiring and components, but be sure to disconnect all wiring from the PCM to avoid damaging the controller during resistance and continuity tests.

Consult the manual on the correct procedures to follow to perform these tests, and compare all obtained readings with the values stated in the manual. If discrepancies are found, make repairs as required, or replace wiring to ensure that all electrical values fall within the manufacturer’s specifications. Clear all codes after repairs are complete, and operate the vehicle for at least one complete drive cycle as per the manufacturer’s instructions to see if the code returns.

NOTE #1: Pay particular attention to the control circuits of the vent-, and purge valves. If for instance, the vent valve does not open, the engine vacuum cannot establish the vacuum required to purge vapors from the system. If the scanner used has control functions, use it to command both the purge and vent valves open and closed multiple times after repairs or tests are complete to verify that the valves actually respond to control inputs.

NOTE #2: Be sure to follow the directions provided in the manual to test the operation of ALL sensors in the EVAP system. Replace any sensor that does not conform to the manufacturer’s specifications, but avoid using aftermarket replacements. These sensors may be a dollar or two cheaper than OEM parts, but they seldom offer the same reliability, accuracy, or durability of OEM parts.

If the code does return, but all wiring and vacuum lines appear to be free of damage and/or obstructions and restrictions, prepare to remove the vent valve and charcoal canister for inspection and/or testing. Consult the manual on the correct procedures to remove these components.

Inspect the vent valve inlet for signs of mud, gunk, dirt, and the presence of insects that sometimes take up residence in the valve inlet if a vehicle is left in storage for extended periods. Remove all obstructions if any are found. On some applications, the vent valve is fitted with a small air filter- remove this filter, and check its condition. Replace, or clean the filter if it is clogged or dirty.

Once it is certain that the vent valve is not plugged or restricted in any way, use the vacuum pump to apply a vacuum to one end of the valve. If the vacuum holds steady, the valve is good, but applying the correct current directly to the control solenoid should cause the vacuum to collapse instantly. If it does not, replace the valve, because it is not opening as far, or as wide as it should.

Next, check the charcoal canister for signs that the charcoal charge might have disintegrated. If this happens, the vacuum lines leading from the canister can become clogged or plugged by migrating charcoal particles. Also, check that air flows freely through the filter by blowing through it from the vent valve side. Use a length of clean, unused rubber tubing for this to prevent inhaling or ingesting vapors, charcoal particles, or sometimes, liquid fuel.

Replace the charcoal canister if there is any doubt about its condition, or serviceability, but do not install either the canister or the vent valve just yet. Note that there should not be liquid fuel in the canister- if there is; the liquid fuel effectively plugs the canister, which will set code P0497 because a vacuum cannot be established to purge the system.

NOTE: On some applications, liquid fuel can enter the charcoal canister when the fuel tank is over filled. To prevent this from happening, never allow the fuel pump nozzle to click off more than once.

Remove the purge valve, and check that is closed by applying vacuum to one end. This valve is normally closed, so if the vacuum decays, however slowly, the valve is defective, and it must be replaced.

Reinstall the charcoal canister it is serviceable (or the replacement), but do not connect the vacuum line between the canister and the vent valve. Attach the vacuum pump to the vacuum line where the purge valve normally goes, and attempt to draw a vacuum.

Reinstall the purge valve (or its replacement), and make sure that all vacuum line connections are tight, and made to industry standards to prevent vacuum leaks. Check that all wiring is connected properly and routed/secured away from hot or sharp-edged components, clear all codes, and operate the vehicle for at least one complete drive cycle with a scanner connected to monitor the operation of the EVAP system in general, and the operation of the vent -, and purge valves in particular.

Assuming that the EVAP system purge lines are clear, and that all EVAP system components work as intended it is highly unlikely that the code will return. However, if the code does return, it is possible that an intermittent fault is present in the system. Be aware though intermittent faults can be extremely challenging to find and repair, and in some cases, it may be necessary to allow the fault to worsen before an accurate diagnosis and definitive repair can be made.

NOTE: Depending on the application, completing as many as eight or more drive cycles may be required before the repair can be verified, or the code reset. In many cases, the code will clear automatically if the fault does not recur within a specified number of start cycles.

P0496 – Relates to “EVAP Flow During A Non-Purge Condition”