OBD II fault code P0494 is a generic code that is defined as “Engine coolant blower motor speed –low” and is set when the PCM (Powertrain Control Module) detects that the radiator cooling fan(s) is/are not rotating at the desired speed given the current operating conditions and engine coolant temperature. Note that code P0494 refers to electrically operated radiator fans, and not viscous or belt-driven fans.

Nonetheless, regardless of design specifics, the PCM monitors the fan speed when it is in operation, and will set code P0494 (and may illuminate a warning light) when it detects that the fan’s actual speed deviates from the fan’s desired speed by about 10%.

The image below shows a typical radiator fan switch, such as might be found on many modern applications today. Note however that the appearance of fan switches vary greatly between applications. Refer to the manual for the affected application to determine the operating principles and switching mechanism(s) of the fan motor control circuit. 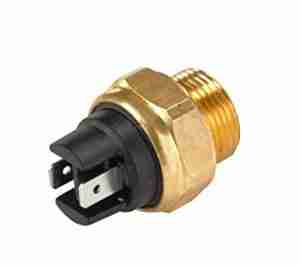 Some common causes of code P0494 could include the following-

Some common symptoms of code P0494 could include the following-

NOTE: Do NOT work on the engine cooling system if it is hot. ALWAYS allow the system to cool down and residual pressure to dissipate before working on any part of the system to avoid serious personal injury.

Record all fault codes present, as well as all available freeze frame data. This information can be of use should an intermittent fault e diagnosed later on.

Refer to the manual to locate the fan switch, and remove the electrical connector. Consult the manual to determine the function of each wire in the connector. Since failed radiator fan switches often cause code P0494, a good way to test the circuit is to insert a jumper wire between the ground and a live wire. If the fan motor and the circuits are both OK, the fan will start and run at the correct speed when the jumper wire is inserted.

WARNING: Be absolutely sure about the terminals in the connector. In some cases there are three wires; one is a ground and the other two both supply power to the motor, but one wire lets the motor run at reduced speed, while the other feeds full power to the motor. Refer to the manual to determine which wire does what to avoid causing a short circuit.

Inspect all fuses, but do not replace blown fuses until the short circuit of electrical overload that caused it blow had been found and repaired.

If the fan relay checks out and there are no blown fuses, test the internal resistance and continuity of the fan motor as per the instructions in the manual.  No continuity means the motor has an internal open circuit, while an abnormal resistance could indicate an internal short circuit. Replace the fan motor with an OEM replacement to ensure proper operation of the system if any electrical value does not agree with the values stated in the manual. Test the system after the motor replacement to verify that the radiator fan works as designed.

If the fan motor checks out, perform resistance, continuity, and ground checks on all associated wiring. Also look for damaged, burnt, shorted, disconnected, or corroded wiring and/or connectors. Make repairs or replace wiring as required to ensure that all electrical values fall within the ranges specified by the manufacturer.

NOTE: Some applications use one or more resistors to vary and control the fan motors’ speed. Be sure to locate all resistors (if fitted) and to test their resistance during this step. Replace all resistors as a set should the resistance value of any resistor not agree with the specified value exactly.

Bear in mind that even though fan switch failure is arguably the most common cause of code P0494, it is very difficult to test these switches reliably. Thus, if all other tests do not reveal the problem, replace the fan switch with an OEM replacement to ensure proper operation of the system.

Steps 1 through 8 will almost certainly resolve this code, but in the rare event that the fault persists, suspect an intermittent fault. Bear in mind though that these types of faults can be extremely challenging to find and repair, so if an intermittent fault is suspected, repeat steps 1 through 8 until the fault is found and repaired, or refer the vehicle to the dealer or other competent repair facility for professional diagnosis and repair.