In terms of operation, the exhaust backpressure sensor is supplied with a 5-volt reference voltage by the PCM. As the pressure in the exhaust changes, the electrical resistance of the sensing element changes as well, with the result that more or less voltage is passed back to the PCM via a dedicated signal circuit, with the changing signal voltage being interpreted by the PCM as changes in pressure.

It should be noted, that on some applications, the input data from the exhaust back pressure sensor is also used by the PCM to monitor/control turbo charger boost pressure, in addition to monitoring / regulating the operation of the EGR (Exhaust Gas Recirculation) system. However, and regardless of the systems the exhaust gas backpressure sensor is associated with on any given application, the PCM depends on reliable, accurate, and plausible input data from the sensor if all associated systems are to work as expected.

Where is the P0470 sensor located? 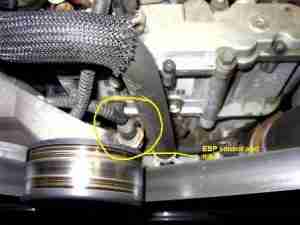 The image above shows the location (circled in yellow) of the exhaust backpressure sensor on a 7.3L Ford Powerstroke engine. However, it should be noted that since the location and appearance of these sensors vary greatly between applications and manufacturers, it is strongly recommended that the manual for the affected application be consulted to locate and identify the exhaust backpressure sensor correctly.

Note however, that on many applications it may be necessary to remove or disassemble major, but unrelated parts and components in order to gain access to the sensor. In fact, on some applications it is so difficult to gain access to this sensor that for many non-professional mechanics the better option might be to refer the vehicle to the dealer or other competent repair facility for professional assistance, or diagnosis and repair.

Some common causes of code P0470 could include the following-