Thus, when a malfunction occurs in the purge valve control circuit and the PCM cannot control the purge valve, code P0444 will be set as a result. Note that on some applications a single failure will set the code, while on others, several fault cycles may be required before a code is set and a warning light is illuminated.

Also note that malfunctions of the EVAP purge valve control circuit can prevent the PCM from completing self-diagnostic tests of the system, which tests include measuring the rate at which an induced vacuum or pressure decays. Failure by the PCM to complete self-tests will also set code P0444. 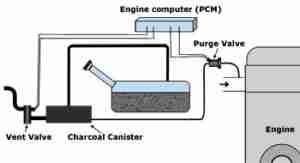 NOTE: Open Circuit means that a component or sensor in a system is deprived of the reference voltage it needs to work. Causes of open circuits are many and varied, but for the most part, this type of code is caused by broken wiring, poor connections across electrical connectors or previously repaired wiring, loss of ground that prevents current flow, blown fuses, defective relays, faulty switches, or any of a host of other issues and problems that prevents the flow of current through wiring.

NOTE: Although code P0444 is rarely caused by issues other than wiring problems and defects in the valve itself, there is one notable exception to this. On early 2000’s Dodge Ram trucks, this code can be set by a short circuit in the seat belt warning chime circuit, since this circuit shares a fuse with both the CD changer and the EVAP system. This is a common problem, so consult the relevant manual on the correct procedure to prevent a continual recurrence of the problem.

NOTE #3: A repair manual or wiring diagram for the application being worked on, as well as a good quality digital multimeter and a hand-held vacuum pump fitted with a gauge are required items to diagnose code P0444.

Record all codes present, as well as all available freeze frame data. This information can be very useful should an intermittent fault be diagnosed later on. Refer to the notes above if any other codes are present along with code P0444. Bear in mind that if multiple codes are present, they must be diagnosed and resolved in the order in which they were stored. Failure to do this will almost certainly result in a misdiagnosis.

NOTE:  Testing of the purge valve is required because it forms part of the control circuit on the one hand, and for the fact that a defective purge valve can set code P0444 on some applications. Note however that where the code is set by a defective valve, other EVAP related codes are almost certain to be present as well.

Hi my hyundai sante fe initially had a p0441 code and my mech changed the purge valve but the light came back after an hour.there is no visible burns on the wire.what can we do again cos my mech is confused

hi, this code can do problems in rpm in the car ?(car GEELY CK CHINESE)P0458,P0508 THE BODY FOR THE IAC END TPS ARE OKEY,IN NORMAL CONDICION THE CAR HAVE UPS END DOWN RPM ,SOME TIME HARD TO START,FOR US IS THE EVAP ARE BAD.