Various sensors in the EVAP system converts changes in the pressure or flow rate in the system into signal voltages, which the PCM compares with pre-defined values. When the PCM receives a signal voltage that does not conform to the expected value for any given operational condition, a code will be stored, and a warning light might illuminate. Note that while most on most applications a warning will be triggered on the first failure, a few applications require several fault cycles before a warning light is triggered.

The function of the EVAP system is to capture fuel vapors before they can escape into the atmosphere. Fuel vapors are collected and either passed through a charcoal canister in which the activated charcoal stores the vapors, before being passed to the inlet tract through a network of hoses to be burned as part of the air/fuel mixture when operational conditions allow this to happen. The rate of flow of the collected vapors is controlled by a purge valve that opens or closes gradually in response to signals sent to it from the PCM, which in its turn, receives pressure-based signals from pressure sensors in the EVAP system.

Note that the rate at which fuel vapors are delivered to the engine for combustion is not constant. For instance, when the engine is under a heavy load that requires additional fuel, the PCM will command the EVAP system to deliver large amounts of fuel vapor. Conversely, when the engine is running at a steady load, the available fuel vapors will be released slowly, and gradually, with the oxygen sensors serving to alert the PCM when the air/fuel mixture reaches an overly-rich condition, at which point the PCM will reduce the vapor flow rate.

The image below shows a simplified schematic of a typical modern EVAP system. 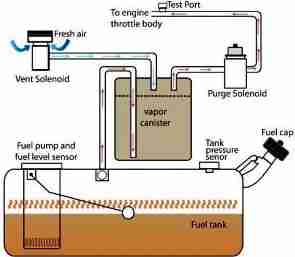 SPECIAL NOTES #1: The possible causes of code P0441 are many and varied, but on most Audi, VW, Nissan, and Mazda models, the most likely cause is a failure of the purge valve, and/or the purge valve control solenoid due to the presence of charcoal pellets that are drawn into the system when the canister starts to fail. On these vehicles, it is recommended that the purge valve and associated all vacuum hoses be replaced when repairing code P0441.

SPECIAL NOTES #2: Many Toyota and Lexus models from the late 1990’s to early 2000’s use a Vacuum Switching Valve that is known to fail regularly due to charcoal pellets being drawn into the valve through vacuum lines when the charcoal canister fails. It is recommended that the charcoal canister, vacuum switching valve, and all associated vacuum lines be replaced when repairing code P0441 on these models.

In these systems, the most common cause of code P0441 is the failure of the NVLD control unit and any diagnostic procedure involving code P0441 on a GM vehicle should start with testing this controller as a first step.  Note that testing the procedures for this controller is frequently model specific, so consult the relevant manual before starting tests.

Other possible causes include the following-

In many cases, there will be no symptoms present other than a stored trouble code and an illuminated warning light. However, in cases where the code is the result of leaks in the EVAP system, a strong odor of fuel may be present. This is usually, but not always, accompanied by other EVAP system related fault codes.

NOTE #1: Be aware that code P0441 is more concerned with the presence, or absence of the vacuum  required to transport fuel vapors to the engine, than it is with the rate of flow in general. Typical factors that will set code P0441 is the absence of a vacuum when there should be a vacuum present, or the presence of a vacuum when there should not be a vacuum in the system. This can happen when the purge valve is stuck in the open position, when the system has a leak, or when the EVAP pressure sensor (or associated wiring) fails, and as a result does not alert the PCM to trigger a vacuum to transport vapors from the system to the engine.

NOTE #2: EVAP systems are set up to continually perform a series of self-diagnostic tests. One such test involves the automatic activation of a dedicated air pump that momentarily pressurizes the system to detect leaks. While the failure of this pump (or its failure to activate) usually triggers codes other than P0441, it is not uncommon for code P0441 to be activated along with several other codes. Therefore, when diagnosing P0441 it is important to follow the rule that says codes must be diagnosed and resolved in the exact order in which they were stored. Failure to follow this rule can result in a misdiagnosis, as well as wasting inordinate amounts of time.

NOTE #3: One of the most common causes of code P0441 is an ill-fitting fuel filer cap that can interfere with the vacuum in the EVAP system. As with most other EVAP system related codes, it is possible to save a lot of time and trouble if the fuel cap is inspected/replaced as a first step in the diagnostic process.

NOTE #4: To diagnose P0441 you will need a repair manual for the application being worked on, a good quality digital multimeter, and a smoke machine to test the system for leaks.

If there are no obvious issues with the fuel filler cap, perform a thorough visual inspection of all associated wiring. Look for damaged, shorted, burnt, or corroded wiring and connectors, and repair/replace wiring as required. Clear all codes and rescan the system to see if the code returns.

If the code persists, consult the manual to determine the location, routing, function, and color-coding of all wiring in the EVAP control circuit. Perform resistance, continuity, ground, and reference voltage checks on all wiring.

Compare all obtained values with those stated in the manual, and repair/replace components and wiring to ensure that all electrical values fall within the manufacturer’s specifications. Clear all codes after repairs/replacements have been completed, and rescan the system to see if the code returns.

NOTE #1: Be sure to include all control solenoids, pressure/flow sensors, and other electrically operated components in this step. Be sure to disconnect the EVAP system from the PCM to prevent damage to the controller during resistance and continuity checks.

NOTE #2: If possible, activate all control solenoids manually to confirm that they are working properly. If the solenoids cannot be activated with a scanner, apply power directly, but be sure to consult the manual on the proper procedures for doing this to prevent short circuits and damage to the solenoids. Also, be sure to check the EVAP pressure (leak detection) pump if the vehicle is fitted with a pump- activate it repeatedly to be sure that it works every time.

If all electrical values fall within specifications and all control solenoids are working properly, inspect the fuel system to check for damaged fuel, vacuum, and vapor lines/hoses. This step is best performed with the vehicle on a vehicle hoist or lift. Consult the manual on the location, routing, and function of each line in the system.

Check for cracked, split, pinched, or otherwise damaged lines, and replace all damaged lines with OEM parts. Check that all connections are secure, and repair connections that are not. Be sure to remove all protective shields and covers to gain access to all vacuum and vapor lines.

NOTE: If you have a vacuum pump available, consult the manual on the proper procedure to test the charcoal canister. However, long experience has taught that replacing the canister is a better way to ensure that the engine vacuum is able to evacuate fuel vapors from the EVAP system.

Connect the nozzle of the smoke machine to the end of hose that connects to the inlet tract, and allow sufficient time for the smoke to work its way through all lines and hoses. Note that this can take several minutes, so do not assume that there are no leaks if you don’t see smoke escaping in the first few seconds. Pay particular attention to the fuel filler cap; if smoke escapes past it, so can fuel vapors: replace the cap if you see smoke escaping past it.

If you do find vacuum leaks, resist the temptation to repair them. The better option is always to replace the affected line between two factory connections. Make sure all connections are gas tight after replacing any lines or hoses.

NOTE: A charcoal canister has a small vent hole, so you would expect smoke to leak through this hole. Replace the canister if no smoke emerges from the vent hole because this indicates that the canister is clogged or defective in some other way.

Once all repairs are completed, check all connections (electrical and otherwise), start the engine and allow the PCM to enter closed loop operation. Keep the scanner connected to monitor the EVAP system in real time. If the code does not immediately return, operate the vehicle for several drive cycles before scanning the EVAP system again.

If the code does not return after several drive cycles, the repair can be considered to have been successful; however, if the code does return, it is likely that an intermittent fault is present. Be aware that intermittent faults can be extremely difficult to trace and repair, and in some cases, you may have to allow the fault to worsen before an accurate diagnosis and definitive repair can be made.

Have you replaced the fuel tank cap? May be as simple as that based on mileage and age of your Audi. Also can take up to 500 miles of normal driving the vehicle or using the correct drive cycle several times to reset the code. Drive cycle for your vehicle may be on internet. I got mine from the dealer (not Audi). Not sure of law in all states but in Texas only an ASE certified mechanic can clear a code. Other way is to disconnect battery to clear the warning light but may not clear the code in the PCM.

I’ve been fighting this problem with my 2007 Hyundai Santa Fe 3.3 V6 for over a year (104,000 miles). Replaced Evap Purge valve 3 times (twice under dealer warranty), all vapor lines replaced, vapor cannister replaced, vapor lines blown to clear charcoal beads. More to the story but this is the basics. After last repair, no light for 500 miles, then bake on again. Dealer never replaced fuel tank cap so I will replace and then try to clear the code. Next option is flush the fuel tank to remove any possible charcoal beads in tank. I never let fuel get below 1/4 tank to hopefully not pick up beads from tank and also to make sure there is plenty of fuel to cool the fuel pump.

Hello Steve. I am fortunate enough have diagnosed this issue on a santa fe 3.3l before. Purge valves and vent valves don’t keep the incorrect purge flow code away unfortunately. There is a connector behind the left kick panel that is brown. It goes to a junction harness block where other harnesses are connected. The problem I found was damaged wires on the brown connector harness. The connector name is mf-11 24p br on a wiring diagram. it goes to lots of wiring connectors such as the intake manifold runner, both fuel level sensors, the purge valve, and vent valve, and othe components. The repair is to replace that wiring harness. I saw through a scan tool readings to the purge valve, and fuel level sensors dropping in and out. Good luck and hope this solves your issue.