“Perfect combustion” should result in harmless emissions, only carbon dioxide (CO2) and water vapor (H2O), but “real world” harmful emissions include oxides of nitrogen (NOX), carbon monoxide (CO), and unburned hydrocarbons (HC), consisting of oil and unburned fuel. Proper maintenance and good driving habits help to reduce emissions, but one more piece of onboard equipment seeks to eliminate them entirely. The three-way catalytic converter (TWC), usually just referred to as “the cat,” combines these harmful emissions with leftover oxygen, getting much closer to the “ideal” perfect-combustion emissions model. 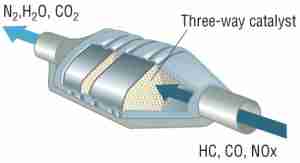 The TWC is part of the exhaust system, perhaps part of the exhaust manifold or installed in the exhaust pipe, and looks like another muffler or resonator. Inside, however, is a metal or ceramic honeycomb material, doped with a soup of chemicals and precious metals, such as aluminum oxide, titanium dioxide, ceria-zirconia, platinum, palladium, cerium, manganese, and copper. When heated by hot exhaust gases, between 600 °F and 1,600 °F, the TWC reduces NOX to harmless oxygen and nitrogen (O2 and N2) and oxidizes CO and HC to produce harmless CO2 and H2O.

The engine control module’s (ECM) primary purpose, aside from running the engine, is to reduce harmful emissions as much as possible, and so it constantly monitors the efficiency of the the TWC. The upstream heated oxygen sensors (HO2S), sometimes referred to as air-fuel ratio (AFR) or lambda sensor, is mainly used to fine-tune air fuel ratio, but the ECM also monitors TWC function by comparing upstream AFR readings to downstream HO2S readings. 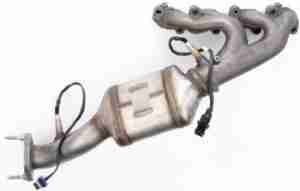 The AFR sensor is constantly switching from rich to lean and back, reflecting ever-changing oxygen content in the exhaust stream. Once the exhaust passes through the catalytic converter, oxygen content should remain steady, by virtue of the TWC’s reduction and oxidation activities. If the ECM detects that there is too much activity downstream, it determines that the catalytic converter is not heating up enough, sets diagnostic trouble code (DTC) P0424, “Heated Catalyst Temperature Below Threshold (Bank 1),” and illuminates the check engine light (CEL).

DTC P0424 may have number of causes. Here are the most common.

Aside from the CEL, you will most likely not notice any drivability symptoms. Your fuel economy will suffer, however, and your car will be producing higher levels of harmful emissions. 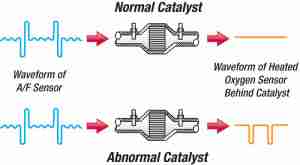