OBD II fault code PO 410 refers to a fault or defect in the Secondary Air System, also known as the Secondary Air Injection System, that is fitted to some vehicles. The purpose of the system is to inject atmospheric air into the exhaust system during cold starts to assist in the oxidization, or burning off of uncombusted and/or partially combusted hydrocarbon molecules in the exhaust stream that result from incomplete combustion during cold starts, when most engines run on highly enriched air/fuel mixtures.

Secondary Air Systems typically consist of a relatively high-capacity air pump in the form of a turbine, a relay to control switching the pump motor on and off, a solenoid and check valve(s) to control air flow, as well various tubing and ducting configurations to suit the application. The image below shows a simplified schematic of a typical Secondary Air System layout. 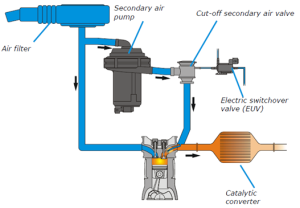 Since Secondary Air systems are relatively simple, there are only a few possible causes of system failure. The most common causes are-

NOTE 1: Since air pumps are known to fail without warning, it is easy to ascribe system failure to a defective pump, when the real problem is often a failed relay. Other common misdiagnoses involve check valves that are taken to work, even though they may be slightly restricted by carbon thus reducing airflow to the exhaust, which can trigger the Check Engine light.

NOTE 2 : Some GM models can experience system failure due to the ingress of moisture into the pump and motor. The relevant Technical Service Bulletin can be found here. Note that this TSB calls for the replacement of some hoses and other components along with the damaged motor/pump.

Code P0410 is set when outside air to burn off excessive hydrocarbons in the exhaust system is absent during a cold start, thus causing the voltage across the front oxygen sensor not to drop to a predetermined level.

Troubleshooting involves the use of suitable diagnostic equipment, with the ideal being a scan tool that can monitor data streams, but this function is generally not available on low-priced tools. Some advanced scan tools have the ability to perform diagnostic tests on the Secondary Air System while the engine is hot, but again, this function is usually not available on scan tools that are available to DIY mechanics.

Nevertheless, the diagnostic procedure requires that the engine be cold, ideally not having run for at least 10-12 hours. Assuming that the scan tool can monitor data streams, start the engine, and confirm that the voltage across the front oxygen sensor drops to, or below 125 millivolts (.125 Volt), after about 5-10 seconds. A fault in the Secondary Air System is confirmed if the voltage does not drop to this value, so perform the following checks-

Trouble codes related to P0410 include the following-

CHECK HOSES. Great post. I have had this code for some time now on my 2003 MB (C230 Kompressor ), and only got serious lately as my (California) smog check loomed. I bought a cheap OBD II reader, to make sure P0410 was my only problem (it wasn’t; once I had to replace my gas cap). My mechanic said I needed to pay him $100 to run diagnostics and then whatever the repairs were. In California it won’t pass with a check engine light. I googled different P0410 issues, and one was hoses. I mentioned this to my mechanic and he pooh-poohed it. I took my C230 home after the B service, and opened the hood to look at the hoses and one little hose literally fell apart in my hands. I went to AutoZone and for $3 bought length enough to replace both little hoses. It has been over a week and the check engine has not come back on (and usually it was back on in 3 days). So, I highly recommend that on an older car (mine is a 2003) you simply check the hoses first. They are cheap and you don’t need any tools — I only used a scissors, and they don’t even clamp. And this is not a part of Service A or Service B (for some reason). Saved me a ton of money!!! Hope this might work for you too!!!!

You’re right, sometimes it’s a simple thing, a $2 hose leading to a $300 valve. Depending on shop policy, repairs like that are usually covered by the diagnostic fee. At least that’s how I did things. Wasn’t going to charge a full hour if I was able to scan the code and find a $2 hose to fix it. On the other hand, there’s no way to tell without getting into it.
Glad you were able to find a cheap and easy fix for your car!