OBD fault code P0371 is defined as “Timing Reference High Resolution Signal “A” – Too Many Pulses”, and can be set either when the Crank Position Sensor, also sometimes known as the Crank Angle Sensor fails, or when something interferes with, or changes the pattern and /or arrangement of the reluctor ring that works in conjunction with the sensor, thereby causing too many ignition/fuel injection pulses to be generated.

Crank Position Sensors come in two types; one type that has only two wires leading out of it, and a second type that has three wires. This is important to remember during testing, since the two-wire type produces am analog signal that can only be tested in AC Volts, while the three-wire type, known as Hall-effect sensors, produce a digital DC Volt signal that can only be tested in DC Volts, or in Hertz Frequency mode. One of the wires on three-wire type sensors supply the sensor with power(which two-wire types do not have), that can be either 9-, or 12 Volts. The section on troubleshooting provides more info on what each wire does.

Both types of Crank Position Sensor work by generating a magnetic field that is interrupted by the reluctor ring the sensor is mounted close to. The interruption of the magnetic field is what generates the signal that is used to generate an ignition spark, as well as a signal to the ECU to activate the fuel injection system. All reluctor rings on all engines have a gap that spans the width of two teeth that serves as a reference to indicate when cylinder #1 is at top dead centre. This reference serves as the basis for all other signals that regulate the smooth and efficient operation of the engine. 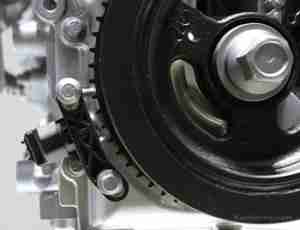 The image above shows a typical Crank Position Sensor, and its position relative to the reluctor ring that works in conjunction with it. Note that the reluctor ring is not always located outside the engine, as it is on this Ford engine. In many cases, especially on GM products, the wheel is located inside the crank case and can only be accessed by removing the oil pan, although the Crank Position Sensor itself may be accessible from outside the engine. Also note the small air gap between the sensor and the teeth on the wheel; this gap is crucial to the correct functioning of the sensor.

The most common cause of sensor failure is old age in the case of OEM sensors. Aftermarket sensors are rarely made to OEM specifications, meaning that such sensors can fail without warning, and for reasons that are not always obvious. Physical damage to sensors such as impacts, water ingress, and corrosion of electrical connectors is relatively rare, but not impossible, and it does happen.

Any damage to the reluctor ring and its teeth can potentially interfere with the correct functioning of the sensor. Inspect the wheel, and replace it if any damage, deformation, or visible defects are evident. Damaged teeth can “confuse” the ignition/fuel injection system, since the sensor is supplying an incorrect reading of the crankshaft’s speed.

Issues involving the magnetic field is more likely to affect vehicles where the reluctor ring in located inside the engine. Metal wear particles in the oil can collect on the sensor, and if there are enough particles sticking to the sensor, they can form a “bridge”, effectively “blinding” the sensor to the teeth on the wheel. Regular oil changes, and occasional removal and cleaning of the sensor can largely prevent this problem from occurring.

Generally speaking, the symptoms of code P0371 are much the same for all engines, although the severity of any particular symptom can vary from vehicle to vehicle. Bear in mind that some of the symptoms listed below can also be caused by foreign objects or material lodged between teeth on the reluctor ring, in which case simply cleaning out the gaps between the teeth should resolve the issue. Here are some common symptoms of code P0371-

Since the Crank Position Sensor has the function of activating the fuel injection system, a failure of the sensor could cause a condition where no fuel is delivered to the cylinders. Be aware though that there are many other possible causes of this condition, and the cause of the hard starting should be sought elsewhere if the extracted fault code does not indicate a fault related to the Crank Position Sensor.

As the engine speed increases, the ECU (Engine Control Unit) needs to make constant adjustments to the ignition mapping and fuel injection timing/duration, using the information from the Crank Position Sensor. Thus, if the ECU receives erratic, intermittent, or otherwise invalid signals, the required adjustments cannot be made, which could result in poor or uneven acceleration.

Efficient, and accurate fuel injection is dependent on accurate signals from the Crank Position Sensor. When fuel is injected depends on where the pistons are during their upward movement, which is information supplied by the Crank Position Sensor. Thus, if the fuel injection system receives invalid or incorrect signals, the engine could compensate by increasing the pulse width of the injectors, which leads to poor gas mileage.

All spark-ignited engines depend on the spark being delivered at just the right moment to run efficiently. Thus, if the Crank Position Sensor delivers the spark either too late or too early, the engine will misfire, which affects performance and fuel consumption. Incorrect spark timing can also cause rough idling, no idling, and even stalling under some conditions, such as when the engine is cold.

Bear in mind that there many possible problems in the ignition and fuel injection systems can mimic the symptoms of a failed, or failing, Crank Position Sensor so before you decide that the Crank Position Sensor is faulty, you need to confirm that the sensor is the cause of the trouble. Here is how to do it, but before you start, make sure you have a high quality digital multimeter, and a good repair manual for the vehicle ready at hand.

Determine the type of sensor you have fitted on the vehicle. Different types require different testing methods. If you have a two-wire sensor, proceed as follows-

NOTE: An engine will not necessarily start even if there is a spark on all cylinders. In practice, even where a spark is present, it may be delivered at the wrong time, in which case the problem is more likely to involve the reluctor ring than the sensor itself.

NOTE: As the engine cranks, a good two-wire sensor will produce about 1Volt AC; however, this reading can fluctuate from around 0.3 Volt AC, to around 1 Volt AC. This fluctuation is normal, and you should only be concerned when there is no reading at all, since this indicates a defective sensor.

WARNING: Make sure that the multimeter leads (and your hands), cannot come into contact with rotating engine parts such as fans and belts when the engine is cranked.

NOTE: The color-coding of the wires will be different between manufacturers, so consult the manual to determine the function of each wire. The correct procedures to identify, and test the power supply and ground wires will be outlined in your manual.

NOTE: As a rule of thumb, the voltage produced by a good three-wire sensor should be the same, or close to the value of its power supply. Thus, if the power supply is 9 Volts, the generated signal should be about the same. The same rule applies to sensors that have a 12 Volt power supply.

Have a 04 grand prix gtp car Will start up run and drive when it hits operating temperature it stalls out rpms go crazy as it dies.. changed crankshaft sensor no luxk