OBD II fault code P0363 is a generic code that is defined as “Misfire detected – fuelling disabled”, is set when the PCM (Powertrain Control Module) detects a misfire on one or more cylinders, and disables the fuel supply to the misfiring cylinder(s) to protect the catalytic converter(s). Note though that while this code is usually accompanied by misfire related codes that identify the misfiring cylinder(s), other codes, such as fuel pressure, ignition, or engine sensor codes that may identify the reason for the misfire might also be present.

Regardless of the cause of a misfire, misfires produce very small fluctuations in the rotational speed of the crankshaft, and modern engine management systems use input data from the crankshaft position sensor to detect these variations. As a practical matter though, misfires mean that the fuel in the affected cylinder(s) is not combusted, or not combusted fully, and the uncombusted fuel is expelled through the exhaust valves into the exhaust system on the affected cylinders’ exhaust stroke.

It should also be noted that while the fuel supply to misfiring cylinders will be disabled on most cars of European manufacture, this feature is less common on American-made vehicles, meaning that this  code (usually announced by a flashing red warning light), should NOT be ignored, and MUST be investigated and resolved at the earliest opportunity, if not immediately. Failure to address this code on an American-made vehicle may result in a vehicle fire that could have fatal consequences.

Where is the P0363 sensor located? 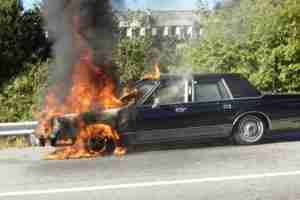 Although the above image does not show the location of any part or component that could have caused a misfire, it does show the result of a failure to address code P0363 in a timely manner.

As stated elsewhere, code P0363 does not identify the probable cause of a misfire on any application, which means that the most effective process of diagnosing and repairing this code involves diagnosing and resolving all additional codes strictly in the order in which they were set and stored.

Non-professional mechanics should nonetheless be aware that when code P0363 is present, not all stored codes are necessarily indicative of problems and issues that relate to any given code. In some cases, one or more codes could have set in response to fault in another, but closely related system and resolving the first code may resolve subsequent codes as well. An example of this would be if say, code P0302 – “Cylinder 2 misfire” were present; in this case, P0363 set as the result of a misfire on cylinder #2, so by resolving the misfire on cylinder #2, code P0363 will be resolved as well.

Nonetheless, some common causes of misfires, and hence, code P0363 could include the following-