A stored code P0336 means that the powertrain control module (PCM) has detected a problem with the crankshaft position sensor (CPS) or circuit. Sensor A is indicative of the primary CPS in a system that may utilize multiple crankshaft position sensors for various functions.
The PCM uses input signals from the CPS and the camshaft sensor/s to monitor the position and revolutions per minute (RPM) of the engine, manage fluctuations in ignition timing, and calculate fuel delivery strategy. Variations in engine configuration will dictate the number of camshaft sensors that are used in conjunction with a single CPS.
Each camshaft sensor has a circuit (or circuits) dedicated to providing the PCM with individual input signal/s. Since the crankshaft turns at twice the speed of the camshaft/s, it is critical that the PCM is able to distinguish between engine intake and exhaust stokes. Crankshaft position and speed are compared to the speed and position of the camshaft/s in order to prevent engine damage.
The most common CPS design utilizes an electromagnetic hall-effect sensor positioned in very close proximity (usually only several thousandths of an inch) to the crankshaft to form a circuit completing engine ground. In most cases, a reluctor ring (with precisely machined teeth) affixed to the crankshaft or crankshaft pulley, provides this engine ground. In other cases, cogs meticulously integrated into the crankshaft itself, provide the engine ground.

The CPS is positioned so that these teeth/cogs pass very closely to its magnetic end. As the crankshaft rotates, the raised areas pass by the sensor and complete the electromagnetic circuit. When the indentations (between the teeth) pass the CPS, the circuit is briefly interrupted. Since the camshaft rotates very quickly, the process of repeatedly completing and interrupting the circuit occurs in milliseconds. This progression of completing and interrupting the CPS circuit produces a waveform pattern. This pattern is recognized by the PCM as crankshaft position. The CPS and all of the camshaft position sensors function in much the same manner.
When the engine is running, the PCM constantly compares input signals from the crankshaft and the camshafts. If the crankshaft position is not within a specified degree of variation from the camshaft/s, under a given set of circumstances for a set period of time, a P0336 code will be stored and a malfunction indicator lamp may be illuminated.
Typically, when this code is set, the engine will not start. If the engine does start, it will likely run very poorly.

A diagnostic scanner, a digital volt/ohmmeter (DVOM), a portable oscilloscope, and access to a reliable vehicle information source such as All Data DIY will be needed before attempting to diagnose a code P0336.

Begin with a visual inspection of all system related wiring harnesses and connectors. Wiring circuits, electrical sensors, and/or connectors that have been contaminated with engine oil, coolant, or power steering fluid should be your focus. Petroleum based fluids are known to corrode the protective insulation on wiring and lead to shorted or open circuits and possibly a stored P0336. 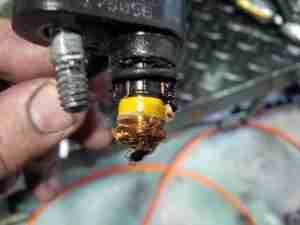 Next, I would connect the scanner to the vehicle diagnostic port and retrieve all stored trouble codes and freeze frame data (if available). I like to write this information down as it tends to help if the code proves to be intermittent. Some scanners also have a DVOM and an oscilloscope with integrated test leads. If you can gain access to this type of scanner, it will be in your best interest when diagnosing a P0336.

I’d proceed by testing voltage and ground signals at the CPS. Most models use a five-volt reference, but consult your vehicle information source for specifications. There should also be a ground signal and a third circuit should provide a signal to the PCM. This is a basic overview and there may also be other output signal circuits, so check the wiring schematic for your vehicle. If reference voltage and ground circuits comply with specifications, go on to the next step.

You also want to look for missing voltage blocks in the waveform pattern. Suspect a broken or worn reluctor wheel or cog if there are missing blocks. I would also check the magnetic tip of the CPS for excessive metallic debris and clean it if necessary. If the waveform pattern is normal, proceed to the next step.

Unplug the connectors from all related controllers and begin testing individual circuits with the DVOM; failure to do so may cause PCM damage. Shorted or open circuits must be repaired or replaced.

If no open or shorted circuits are found, suspect a defective PCM or a PCM programming error.

What do you mean “give it five minutes,” like wait five minutes and try starting again? That sounds to me like a fuel drainback issue, like the fuel pressure regulator isn’t holding?

Regarding the DTC, which sensor did you replace? There’s a Hall Effect sensor behind the harmonic balancer, which I saw on YouTube doesn’t seem to like overseas “OEM” balancers (something not visible, but magnetic). https://www.youtube.com/watch?v=U7CX-B-I3a8