OBD II fault code P0313 is a generic code that is defined as “Misfire detected -low fuel level”, and is most commonly set when the PCM (Powertrain Control Module) detects a misfire on one or more cylinders when the fuel level in the tank is below a minimum allowable level.

However, code P0313 is among a group of ambiguous codes, which if taken at face value, appear to be easily resolvable, but in practice though, code P0313 can also be set even if the fuel tank is full. Thus, if it is certain that the fuel level is above the fuel pump pickup point,  it is often more profitable to  approach this code from the standpoint of there sometimes not being enough fuel (relative to air) available at one or more cylinders to complete the combustion process successfully. An air/fuel imbalance is most commonly due to large vacuum leaks that cause unmetered air to enter the engine, defective fuel injectors, and/or defective sensors that could include the MAF (Mass Airflow) sensor, IAT (Intake Air Temperature) sensor, and MAP (Manifold Absolute Pressure) sensor, among others.

From the above it should be clear that code P0313 could have many possible causes besides a low fuel level. However, most, if not all other possible causes will almost certainly be indicated by trouble codes that relate to specific issues other than a low fuel level. In these cases, it is almost certain that P0313 had set as a reaction to other issues, as opposed to P0313 having been the cause of the additional codes.

Note that if other codes are indeed present along with P0313, one or more of these codes could cause the PCM to initiate a failsafe or limp mode, particularly if there is a possibility that the misfire might damage the catalytic converter(s).

Where is the P0313 sensor located? 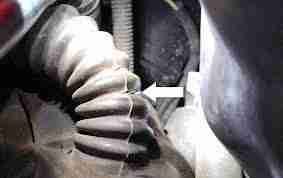 The image above shows the type of damage (indicated by the white arrow) to the inlet ducting that might cause code P0313 to set in cases where the code did not set as the result of a low fuel level.

It is perhaps worth noting that if there are no additional codes present along with P0313, the most common cause of this code is an actual low fuel level. However, while air leaks in the inlet ducting (as shown above) often remain undetected until a thorough visual inspection of the inlet ducting is performed, vacuum leaks such as the one shown above can cause “lean running”, or even  seemingly random misfire related codes, including P0313.

Other possible causes of code P0313 could include the following-

Other possible contributory causes of code P0313 that are not directly related to the fuel system could include the following, but note that these issues will almost certainly be indicated by codes that relate to a specific issue-

hello, I did a service on the head, because the toothed belt jumped and bent 4 intake valves, after the assembly the car when it heats up starts to fail and even cold there is a lot of variation in the engine operation, already take in mechanics but they can’t detect the proplema, I already thank anyone who can help, follow the screen print of the scanner, I used the torque pro. https://drive.google.com/file/d/11K45YnIiNdeyLiVnR4jrJnuoVVAxU9SC/view?usp=drivesdk

Tiago, so with doing a valve job, you wont get the same performance from your motor after this has been done to the top of the motor. Most likely the problem is lower compression. On cylinder 4. I took a look at your screen shot. Sure enough that it will misfire on that cylinder, consume oil, and fail while running. The oil seals on the number 4 piston now have to work overtime on the stroke, the oil seal is or will wear out. Can I suggest getting a new cylinder head, or one with low miles on it used.