P0270 tells you where the problem is believed to be located, and what the problem appears to be. In this case, the code tells you it is a powertrain issue, that either the fuel mixture for the #4 cylinder is out of range or the fuel injector’s spray pattern is abnormal, or both.

The Check Engine Light was illuminated because the vehicle’s powertrain control module (PCM) detected a drop in voltage in the fuel injection sensor in the #4 cylinder. It is in the PCM where OBD codes are generated when one or more of the sensors it monitors malfunctions, or gives an out-of-range reading.

A P0270 code will be generated when a low fuel injection sensor voltage for the #4 cylinder is detected. This sensor is an oxygen sensor, and the low voltage is often an indication that the injector’s spray pattern has changed and the #4 cylinder’s fuel mixture is too lean.

The symptoms arising from too lean of a fuel mixture can vary in their characteristics as well as in their intensity. What typically happens, is that when the PCM senses the fuel mixture is too lean, it enriches the fuel mixture. Unfortunately, it does so in all cylinders; not just the #4 cylinder.

One of the more prominent symptoms is engine knock. The lean mixture in the #4 cylinder creates a higher cylinder head temperature. This higher temperature causes premature denotation of the fuel-air vapor mixture, which in turn causes knocking.

Once the P0270 code has been detected, the first step to take is to try to determine whether the problem is with the fuel injector itself, or with its associated electrical connectors and wiring. The electrical connector, and the harness, should be inspected first to see if anything has become loose or has become corroded. If everything appears to be normal, the next step will be to see if the fuel injector is operating. 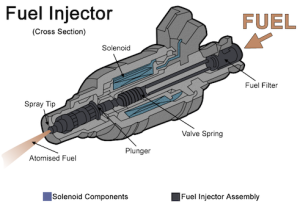 There is always a possibility that more than one ODB code may be present when the Service Engine light illuminates. Should that be the case, a check should always be made to see if any of the other codes are still present once any code P0270 issues have been resolved.