OBD II fault code P0258 is defined as “Injection Pump Fuel Metering Control “B” Low (Cam/Rotor/Injector)”, and is set when the PCM (Powertrain Control Module) detects a variation between the signal voltage delivered to the electronic fuel control actuator, and the signal voltage returned by the fuel metering control sensor. Note that this code applies to diesel engines exclusively.  “B” refers specifically to the control circuit of the fuel control actuator on the pressure pump. This is the device that controls the amount of fuel that enters the pump.  “A” codes are more relevant to the same electrical issues on the pressure sensor on the fuel rail that generates the signal voltage that regulates pulse width and injection timing.

All common rail diesel injection systems use a device known as an “electronic fuel control actuator” to meter the amount of fuel that is allowed to enter the actual pumping chamber(s) of a high pressure diesel fuel pump. This device therefore determines the amount and pressure of the fuel that is ultimately delivered to the fuel rail. However, the pressure in the fuel rail needs to be controlled within a very narrow range: there are various ways in which this is accomplished, but to ensure that the actual pressure in the fuel rail closely matches the nominal design pressure, most applications use a variable resistance-type sensor to communicate the actual pressure to the PCM.

The pressure sensor converts fuel pressure into a signal voltage, which the PCM uses to calculate injector pulse width (measured in milliseconds) and injection timing (measured in degrees Before Top Dead Center) to ensure that the correct amount of fuel is injected into the cylinders under all operating conditions. Thus, the signal voltages of the electronic fuel control actuator and the fuel metering control sensor must be in agreement for the PCM to be able to calculate an appropriate fuel delivery strategy to ensure efficient engine operation under all engine speeds and loads.

On some applications, code P0258 will set and a warning light be triggered after a single failure, while on others, several failure cycles are required before the code is set and warning light is illuminated.

The image below shows a simplified schematic of a typical fuel pressure control system. Note the location of the fuel control actuator on the high pressure pump, and the location of the pressure sensor on the fuel rail. Note also that although this particular system employs an electric lift pump in the fuel tank, not all applications are so equipped. 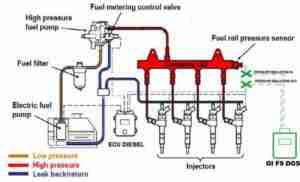 One of the most common causes of P0235 is a restricted flow of fuel to the high pressure pump. Common restrictions are clogged or dirty fuel filters or strainers. Other possible causes could include the following-

Depending on the degree of variation between signal voltages, the symptoms of this code might be no worse than a stored code and an illuminated warning light. However, some symptoms may be severe, and could include the following-

NOTE #1: In many cases where code P0252 is present, the problem involves a clogged or dirty fuel filter that restricts fuel flow to the high pressure pump. Also note that most pressure pumps are fitted with fine-mesh strainers at the inlet point that can also restrict fuel flow when they become clogged. It is therefore recommended that the fuel filter and strainer be checked as a first step in the diagnostic process to save time and prevent a possible misdiagnosis.  Consult the manual for the application being worked on for the exact location of the inbuilt fuel strainer.

NOTE #3: If the code appears soon after the first use of bio-diesel, inspect the fuel lines and filter for the presence of a waxy substance. Bio-diesel is an excellent solvent, and on older diesel systems it dissolves the various waxes that regular diesel deposits on the walls of the fuel tank and fuel lines over long periods. The only way to rid the fuel system of dissolved waxes is to have the tank and fuel lines/system cleaned chemically.

Assuming that the fuel filter and strainers are clean, and that there is no evidence of corrosion or contamination of any sort in the fuel system, record all codes present, as well as all available freeze frame data. This information can be of use should an intermittent fault be diagnosed later on.

Consult the manual on the location, routing, function, color-coding of all associated wiring and perform a thorough visual inspection of all wiring and connectors. Look for burnt, damaged, shorted, or corroded wiring and repair all faults found. Clear all codes after repairs had been made, and rescan the system to see if the code returns.

If the fault persists, perform reference voltage, resistance, ground, and continuity checks on all associated wiring. Compare obtained readings to the values stated in the manual, and repair wiring, or replace components to ensure that all readings fall within the manufacturer’s specifications. Clear all codes, and retest the system to see if the code returns.

TIP: When performing resistance and continuity checks, pay particular attention to the readings obtained between the-

These values should match those stated in the manual exactly (or very close to it). On some applications, a variation of only a few percent can cause P0258 to be set.  Note that the PCM and other controllers must be disconnected from the system to prevent damage to the controllers.

NOTE#2: If the vehicle is fitted with an electric lift pump in the tank, now would be good time to test its control circuit for resistance, reference voltage, ground, and continuity. Compare obtained readings with those stated in the manual, and make suitable repairs to ensure that all values comply with specifications. If all values check out OK, but the code persists, remove the pump and test it according to the directions supplied in the manual. Replace the pump if it does not conform to specifications. Clear all codes, and retest the system to see if the code returns.

If the fault persists, and it is certain that the fuel shut-off solenoid and lift pump (if fitted) both work properly, consult the manual on the procedure on how to test the fuel pressure at the fuel rail. This test requires the use of a dedicated diesel fuel pressure gauge, but make absolutely sure to follow the directions in the manual to the letter.

Compare the obtained test pressure result with the value(s) stated in the manual. Note that even if the fuel pressure at the rail falls within specification, the volume of fuel delivered by the pump might not be within acceptable limits over any given period of time. If this is the case, the engine may start but shut off soon after, or as soon as the engine speed is raised.

NOTE: Testing the fuel volume often requires specialized equipment, but one way of doing it simply is to leave the pressure gauge attached when the engine is started.  If fuel volume is the problem, the gauge will clearly show a drop in pressure just as the engine shuts off.

WARNING: Diesel injection systems work at extremely high pressures, and serious injury or even death can result from incorrect pressure testing procedures, or by ignoring basic safety precautions, which will be outlined in the manual.

WARNING: Before removing the pressure sensor, be sure to follow the directions in the manual on how to SAFELY release the residual pressure in the fuel system. Serious personal injury can result from not following the directions exactly.

If the fault still persists at this point, but all electrical test readings fall within specifications, it is likely that the electronic fuel control actuator is defective. However, if fuel is being delivered to the fuel rail at the correct pressure and volume most of the time, it is more likely that there is an intermittent electrical fault present.

At this point, the better option would be to refer the vehicle for professional diagnosis and repair. Repeating electrical tests under varying conditions until a possible intermittent electrical fault is found and repaired might be possible for non-professional mechanics, but diagnosing internal problems on a modern high pressure diesel fuel pump should NOT be attempted by non-professionals.

The letters “A” and “B” don’t refer to pumps but rather to different parts of the fuel pressure control system.

“B” refers specifically to electrical low/high/intermittent/malfunctions in the control circuit of the fuel control actuator on the pressure pump. This is the device that controls the amount of fuel that enters the pump.

“A” is more relevant to the same electrical issues on the pressure sensor on the fuel rail that generates the signal voltage that regulates pulse width and injection timing.

what is the ecuator to the (engine )?