OBD II fault code P01C1 is a generic trouble code that is defined as, “Fuel Rail Pressure Sensor Circuit High Bank 2”, and is set when the PCM (Powertrain Control Module) detects an abnormally high electrical current or voltage in the control and/or signal circuit(s) of the fuel rail pressure on Bank 2. Note that “Bank “refers to the bank of cylinders in V-type engines that does not contain cylinder #1.

All fuel-injected engines, regardless of their make, model, or type can only function properly when the fuel they run on is available within a narrow range of pressures. This is to allow the fuel injectors to not only inject the required volume of fuel during each injection event but also to atomize the fuel properly during injection events to ensure the efficient combustion of the fuel.

All of the above requirements would be impossible to achieve and maintain unless the PCM (and other control modules) had a way of monitoring the fuel pressure in the fuel rails continuously. Therefore, to do this, all engines are fitted with dedicated fuel rail pressure sensors to monitor the pressure in the fuel rails for as long as the engine is in operation. In a fully functional fuel delivery system, the PCM matches the fuel supply to constantly changing fuel demands either by varying the speed of the fuel pump or by activating a pressure relief valve in the fuel system to vent excess fuel pressure back to the fuel tank via one or more dedicated return lines.

Regardless of the method employed by any given PCM, all PCMs are programmed to maintain the fuel pressure within a very narrow range on either side of a desired or specified pressure at any given engine speed and load to ensure proper engine operation under all operating and driving conditions. Thus, if a failure, malfunction, or defect occurs in the fuel system that prevents the PCM from monitoring or managing the fuel pressure in the fuel rails, it will recognize that it cannot control the fuel pressure effectively, and it will set code P01C1, and illuminate a warning light as a result.

Note though that apart from the above, the PCM may also set additional trouble codes, initiate a fail-safe or limp mode, or revert to a default fueling strategy that may or may not include restricting the engine speed, depending on both the application and/or the nature of the problem.

Where is the P01C1 sensor located? 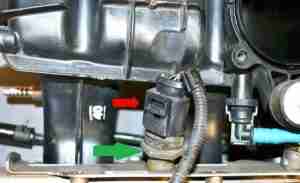 This image shows the typical appearance and location of a fuel rail pressure sensor on a VW application. In this example, the red arrow indicates the sensor’s electrical connector, while the green arrow indicates the sensor itself.  Note though, that the actual appearance and location of fuel rail pressure sensors may differ from the example here, with some sensors having four wires. Or with the sensor being located on the fuel pump canister in the fuel tank. Therefore, we strongly recommend that you consult reliable service information for the affected vehicle to locate and identify the correct sensor.

WARNING: Be aware that some fuel systems may contain a potentially high residual pressure for several minutes after the engine is switched off. Thus, if you are going to remove any component from a fuel rail, be sure to observe all recommended safety precautions to avoid sustaining potentially serious personal injuries or engine fires.

What are the common causes of code P01C1?

NOTE: In the majority of instances of code P01C1, the root cause(s) of the code are far more likely to involve wiring and/or programming issues than faults or defects with the pressure sensor itself. Take note that in cases where the pressure sensor is supplied with a 5-volt reference voltage by the PCM, this current is often shared by other (unrelated) sensors, meaning that faults, defects, and failures in unrelated sensors, or almost anywhere in the shared reference voltage circuit could, and often does, cause code P01C1 to set.

Nonetheless, some (other) common causes of code P01C1 could include one or more of the following-

What are the symptoms of code P01C1?