OBD II fault code P013A is a generic trouble code that is defined as “O2 Sensor Slow Response – Rich to Lean Bank 1 Sensor 2”, and is set when the PCM (Powertrain Control Module) detects a slow or delayed response from the #2 oxygen sensor. Note that “Bank 1” refers to the bank on cylinders on V-type engines that contains cylinder #1, and that “Sensor 2” refers to the oxygen sensor that is located downstream from the catalytic converter.

All modern gasoline engines use sensors that compare the concentration of oxygen in exhaust gas to the oxygen content of ambient air to determine the quality of the air/fuel mixture. Put differently, this means that the amount of oxygen in the exhaust gas is a direct indication of how close the air/fuel mixture at any given moment is to a stoichiometric value or ratio. For gasoline engines, this ratio is 14.7 parts of air to 1 part of fuel, and in this ratio, all the available air is used to burn all of the fuel.

As a practical matter, the purpose of the upstream oxygen sensor is to measure the actual level of oxygen in the exhaust stream, and it does this via a complex chemical process or reaction that generates an electrical current that changes in direct response to changing oxygen levels in the exhaust gas. The PCM interprets the changing signal voltages as changes in the oxygen level, and it uses this data to adapt the amount of fuel that is injected into the cylinders. This process is known as “closed-loop” operation, but to prevent large changes to the amount of fuel being injected, the PCM switches the oxygen sensor’s control voltage between reading rich and lean several times per second.

This has the effect of averaging out the changes in fuel delivery volumes over time, meaning that while the PCM has to make many adaptations per second, each change is small, which, makes it easier to maintain the air/fuel mixture at or close to a stoichiometric value.

However, to monitor the fuel delivery process, the PCM uses input data from the downstream oxygen sensor as well. In practice, the purpose of the downstream sensor is to monitor the efficiency of the catalytic converter, since much of the converter’s efficiency is a function of the composition of the air/fuel mixture. However, when this code is diagnosed, a technician will monitor the switching rate of the upstream sensor, which can be as rapid as 20 times or more per second.

In a fully functional system, the switching rate of the upstream sensor will establish a near-constant oxygen level in the exhaust stream, so the technician will confirm that the downstream sensor’s signal voltage remains stable at around 0.45V to about 0.50V. The PCM interprets this voltage as confirmation that a) the catalytic converter’s efficiency is within acceptable limits, and b), that the air/fuel mixture is at, or close to the stoichiometric ratio.

Where is the P013A sensor located? 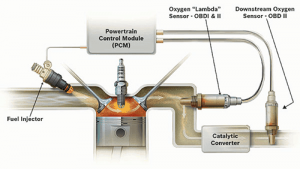 What are the common causes of code P013A?

The most common causes of code P013A are largely similar across all applications, and could include one or more of the following-

What are the symptoms of code P013A?

Common symptoms of code P013A are largely similar across all applications, but note that the severity of one or more symptoms may vary depending on both the application and the exact nature of the problem-