OBD II fault code P0126 is a generic code that is defined as ““Insufficient coolant temperature for stable operation”, and is set when the PCM (Powertrain Control Module) detects that the temperature of the engine coolant is below the minimum threshold that is required for stable and efficient engine operation.

NOTE: Note that this code will not set immediately upon starting an engine that has not run for at least several hours. This code will only set after a period of time (that has been programmed into the PCM) during which the engine is expected to reach operating temperature has elapsed. Also, note that although this time period varies from application to application, and that both high and low ambient temperatures can influence this time period, all modern engine-cooling systems are designed so that the engine reaches a predefined operating temperature in the shortest possible time both to reduce harmful exhaust emissions, and to limit mechanical wear of moving parts.

While “engine operating temperature” is a rather loose term that is very difficult to define exactly, all engines need to be at a certain temperature for the PCM and other control modules to be able to manage that engine in a manner that ensures smooth and efficient operation of the engine. However, since the combustion process in diesel engines is markedly less susceptible to the effects of low temperatures than gasoline engines are, this code has a much larger effect on how efficiently gasoline engines operate at low temperatures than it has on diesel engines.

In practice therefore, the temperature of the engine coolant (obtained from one or more dedicated engine coolant temperature sensors) is one of the most critical data points the PCM uses to determine appropriate fuel delivery, ignition timing, and gearshift strategies while the engine is cold, since the combustion of gasoline at low temperatures is very inefficient.

Thus, when a cold engine is started, the PCM will adapt fuel delivery and ignition timing in such a way that combustion is improved, but at the expense of fuel consumption and increased emissions, since the PCM will typically increase the fuel injectors’ pulse width to enrich the air/fuel ratio. However, as the engine, and therefore, the engine coolant warms up, the PCM uses this input data to make continuous adaptations to the fuel delivery and injection timing, since the heat of the engine is starting to make a contribution to the combustion process. Put in another way, this means that the PCM will progressively reduce the fuel injectors’ pulse width while making suitable adjustments to the ignition timing as the engine warms up, since combustion becomes more efficient the hotter the engine gets.

Once the engine coolant reaches a temperature of about 1800F (820C) on most applications, the PCM will recognize that the engine is at operating temperature, at which point it will start to make full use of the input data from the oxygen-, exhaust gas temperature, and other sensors to control/ manage the fuel and ignition systems. However, if a problem in the cooling system, such as for instance, a thermostat that is stuck in the open position were present, the engine coolant will likely not reach the required temperature within the required time, which will cause code P0126 to be set. Note that whether or not a warning light is illuminated on the first failure depends on both the application, and the severity of the problem.

Where is the P0126 sensor located? 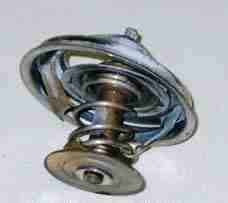 The image above shows a broken/damaged thermostat that is stuck in the open position. In this condition, the thermostat is unable to regulate the temperature of the engine coolant, since it cannot close to interrupt the circulation of the coolant’s temperature falls below a certain temperature.

Note though that while all thermostats generally look like the one in the image, the actual locations of thermostats vary somewhat between applications. Nonetheless, all thermostats are usually located close to the cylinder head, if not actually in the cylinder head. If a repair manual for the affected application is not available, the easiest way to locate the thermostat is to locate the bottom radiator hose, and to trace this hose back to the engine, where the hose will usually terminate in a plastic or aluminum housing/casing that encloses the thermostat.  Note though that on some applications, the thermostat is located between the engine and the top radiator hose.

Be aware though that on some applications, it may be necessary to remove or partially disassemble unrelated components such as the A/C compressors and/or hoses, power steering pump and/or hoses, drive belt(s)/idler pulleys/tensioning devices, and sometimes even the radiator/radiator cooling fan(s) to gain access to the thermostat for the purpose of replacement.

Some common causes of code P0126 could include the following-