What Does Code P00FF Mean?

SPECIAL NOTES: Be aware that some online resources and databases, as well as some official repair information published by many car manufacturers still list trouble code P00FF and several other closely related trouble codes as ISO/SAE Reserved. In this context, “Reserved” means that these trouble codes have –

However, in early iterations of exhaust emission control systems, some manufacturers, most notably General Motors and Ford began to adopt auxiliary air systems to dilute exhaust emissions to barely acceptable levels. More information is provided below, but note that auxiliary air injection systems have largely become defunct, and are therefore no longer in widespread use on modern vehicles, although they may still be present on preserved examples of some classic cars. END OF SPECIAL NOTES.

OBD II fault code P00FF is a generic trouble code that is defined as, “Body Control Module Requested MIL Illumination”, and is set when the BCM (Body Control Module) and/or PCM (Powertrain Control Module) detects a problem, defect, malfunction, or failure in the auxiliary air system, which forms part of the larger Fuel and Air Metering System that it cannot identify directly.

NOTE: Note that in many technical sources, the auxiliary air system is referred to as the “secondary air system”.

In their simplest form, auxiliary air injection systems were simple blower fans that forced clean air through the exhaust system to dilute the exhaust gas on the one hand and to assist with warming up both the catalytic converter and the (then) unheated narrow band oxygen sensors.

This was necessary for two reasons. The first reason was that the catalytic converters of the time largely depended on the heat of the exhaust stream to warm up to the point where they could begin to convert harmful exhaust emissions into less harmful substances, and as a result, it could take several minutes for the catalysts to warm up sufficiently.

The second reason was that the oxygen sensors of the time did not have dedicated heater elements, meaning that until the exhaust stream heated them sufficiently to begin working, they could not provide feedback information to the ECU for fuel control purposes. Thus, like the catalytic converters of the time, unheated oxygen sensors could also take several minutes to arm up to the point where they could begin to provide feedback in a process that is commonly known as closed-loop operation.

Nonetheless, things were different twenty years ago, so when a control module, the body control module in the case of GM applications, deemed conditions suitable for the auxiliary air system to run, it would command the blower fan to activate. The flow of fresh, oxygen-rich ambient air greatly increased the temperature in the catalytic converter, which translated into warm-up times of around 60 seconds for the catalytic material, and about 90 seconds or so for the narrow band oxygen sensors.

Once the implicated control module received confirmation that the oxygen sensors have begun working by monitoring and evaluating their feedback signals, the auxiliary fan would be deactivated, and closed-loop operation of the fuel control system began.

However, due to their locations in engine compartments, auxiliary air fans/systems were hugely problematic; in fact, they were so prone to failure that GM and Ford applied to the SAE and ISO to use code P00FF and several others to indicate issues with these systems. In practice, most failures on both Ford and GM applications resulted from water ingress into the fans’ electric motors, and in cold climates this water often froze, which often caused extensive damage to the fan, its motor, and associated wiring.

In some cases, though, the implicated control module could not identify the actual problem in much the same way that even today’s advanced control systems cannot always identify the causes of some misfires. Thus, when this happened, the implicated control module would request that the MIL (CHECK ENGINE) light be illuminated as an indication to a driver that an unidentified or unidentifiable fault had occurred in the auxiliary air injection system.

Where is the P00FF sensor located? 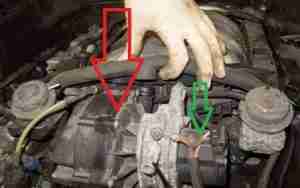 This image shows an example of an auxiliary air pump on a 2001 Mercedes- Benz application. In this example, the electric motor is indicated by the small green arrow, while the large red arrow indicates the actual blower fan.

Note that the appearance and location of secondary air fans vary greatly, and in some cases, it may ne necessary to remove unrelated engine parts and components to gain access to the fan or motor. For this reason, we strongly recommend that you consult reliable service information for the affected vehicle to locate and identify the fan assembly correctly.

What are the common causes of code P00FF?

What are the symptoms of code P00FF?

Some common symptoms included one or more of the following, but note that in many cases, code P00FF produced no noticeable drivability symptoms-