OBD II fault code P00C6 is a generic trouble code that is defined as, “Fuel Rail Pressure (FRP) – Engine Cranking – Pressure Too Low” or sometimes, as “Fuel Rail Pressure Low During Cranking”, and is set when the PCM (Powertrain Control Module) detects a condition in which the fuel pressure in a fuel rail is too low to-

In both conditions, the PCM will not complete the starting circuits during cranking, effectively preventing the engine from starting.

In older fuel injection systems, the fuel pressure was supplied by a fuel pump in the fuel tank that delivered fuel to the fuel rail and from there to the injectors, at a near-constant rate and pressure. In practice, both the volume and pressure of the supplied fuel were somewhat higher than the engine needed even under wide-open throttle conditions, so to manage the fuel pressure when the demand for fuel suddenly decreased, fuel rails were typically fitted with pressure relief valves that vented excess pressure back to the fuel tank through dedicated return lines.

The process of starting a modern engine is a highly complex and technical one, and as such, the complete process falls outside the scope of this article. However, we can break a generic process down into bullet points to make at least a small part of the process clearer-

The above scenario might sound like a long-drawn-out affair, but all of it (and more) actually occurs within about two seconds or less, so none of it is noticed by the driver when they start a modern vehicle.

As a practical matter, however, the PCM and other control modules will not allow the starting procedure to progress beyond the engine cranking stage in cases where the static fuel pressure is too low for the fuel injectors to work efficiently. In some cases though, the PCM and one or more other control modules will not even allow the engine to crank when the fuel pressure is too low.

Insufficient fuel pressure during engine cranking can have dozens of possible causes, but in practice, code P00C6 only indicates a low fuel pressure condition. It takes no account of any possible or probable causes, most of which set dedicated trouble codes, but note that some do not. Regardless of the cause, however, when the PCM or other control module detects an insufficient fuel pressure condition during cranking, it/they will recognize that they cannot control the engine management and/or fuel delivery system effectively, and the PCM and/or dedicated fuel control module will set code P00C6, and illuminate a warning light.

Where is the P00C6 sensor located? 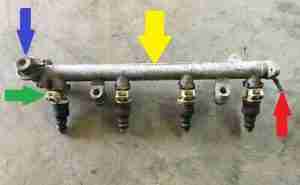 While most fuel rails follow this general pattern, the location of fuel intake points and pressure sensors vary between vehicle makes and models. Moreover, on vehicles with returnless fuel systems, there may not be a fuel pressure regulator fitted to the fuel rail.

Be aware that while fuel rails are always attached to cylinder heads, it may be difficult to access the rails on some applications. In some cases, it may necessary to remove several cosmetic engine covers, as well as some major unrelated engine components, which often include intake manifolds and intake air ducting. Therefore, we strongly recommend that you consult reliable service information for the affected vehicle before attempting any repairs or servicing of fuel rail components to avoid making potentially expensive mistakes, or inadvertently creating fuel leaks that could cause engine fires.

What are the common causes of code P00C6?

Some common causes of code P00C6 are many and varied, and could include one or more of the following-

WARNING: Leaking injector seals or fuel line junctions can, and very often does, create destructive fires, meaning that when a strong smell of fuel is present along with code P00C6 (or any other fuel-related trouble code, for that matter), the origin of the leak must be found and corrected immediately. Moreover, the vehicle must NOT be operated until the leak is found and repaired, since fuel fires can start without warning, and at any moment.

What are the symptoms of code P00C6?