What Does Code P00BC Mean?

NOTE: The P00BC error code is a common challenge that may likely occur in a 2007 X3 E83 BMW when the car’s computerized system detects a malfunction within the mass airflow sensor system. This could be due to too high or too low airflow. When this occurs in your BMW X3, you will most likely experience rough idling, engine stalling, difficult engine start, etc. It is pretty straightforward to fix this issue. Simply check out for any defective electrical connections with MAF sensor harness and reconnect properly or clean the air intake system/mass airflow system thoroughly with a recommended cleaner. If the problem persists, kindly replace the MAF sensor.

The diagnostic error code P00BC is associated with the mass airflow of modern vehicles. It means Mass Air Flow “A” Circuit Performance – Air Flow Too Low. The code is triggered once a car’s PCM – Power Control Module detects a malfunction or defect in the mass airflow sensor or circuit.

However, if the PCM also detects an irregularity in the frequency of the mass airflow signal, as well as a slower signal interval, the malfunctions will most likely trigger the release of the trouble code.

Once the mass airflow sensor or circuit is faulty, the signals it sends to the PCM will most likely be incorrect, resulting in the inappropriate distribution of fuel to the vehicle’s engine. Also, if the airflow capacity is lower or higher than what is expected of the airflow system for proper functioning, it will affect the engine performance.

Where is the P00BC sensor located? 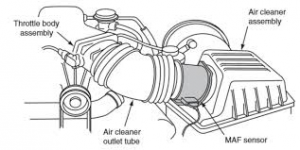 The mass airflow sensor is usually mounted on the air intake tract beneath the vehicle’s air filter within the engine compartment. The component is responsible for measuring the air intake volume and density that enters the engine. This information helps the PCM to ascertain the quantity of gasoline the engine needs for effective and efficient performance.

What are the common causes of code P00BC?

Some of the common causes of code P00BC in a car include the following:

What are the symptoms of code P00BC?

Some of the common symptoms of code P00BC include the following:

What are common solutions to code P00BC?

How do you troubleshoot code P00BC?

After replacing the MAF you made sure to clear DTCs and reset the ECM? It’s not throwing a circuit problem, so it seems that the ECM is recognizing the MAF sensor, but it still tells you it’s seeing an air flow problem. There isn’t anything blocking the sensor? Does this have an aftermarket intake?