What Does Code P00AA Mean?

OBD II fault code P00AA is a generic code that is defined as “Intake Air Temperature Sensor 1 Circuit Bank 2”, and is set when the PCM (Powertrain Control Module) detects a failure in the control and or signal circuit(s) of the intake air temperature sensor on bank 2. Note that “Bank 2” refers to the bank on cylinders that does not contain cylinder #1 on V-type engines.

In practice, there is a direct correlation between the temperature and density of atmospheric air; the colder the air, the denser the air is, with the corollary that the hotter the air is, the less dense it is, and the function of an intake air temperature sensor is to measure the actual temperature of the intake air that enters the engine.

However, since modern engine and fuel management systems can control the amount of fuel that is injected at any given moment regardless of operating conditions, it uses input data from sensors such as the MAF (Mass Airflow) sensor, MAP (Manifold Absolute Pressure sensor if fitted), and the Intake Air temperature sensor(s) among others,  to calculate a fuel delivery strategy to suit the volume of air that is entering the engine.

From the above, it should be obvious that intake air temperature sensors play a critically important role in efficient engine management, and if a failure, defect, or malfunction exists that causes the sensor not to work, or to deliver inaccurate or implausible data to the PCM, the PCM will recognize that it cannot control the air/fuel mixture effectively. When this happens, the PCM will set code P00AA, and illuminate a warning light.

Where is the P00AA sensor located? 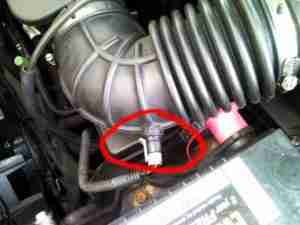 However, intake air temperature sensors are typically also located directly on the inlet manifold, or in some cases, may be incorporated into the throttle body.

What are the common causes of code P00AA?

Some common causes of code P00AA could include the following-

The sensor you are talking about in this picture in my car is cut. I need to figure out where it should be wired to. Please help.

I have a 01 Tacoma extra cab 2.4l calif evap system and I can’t find the IAT SENSOR THE BOOK says it is in the air filter box there isn’t even a place for it to be. If I get a push start it starts right up and runs like a bat out of hell until it sets for 4-5 hours then it won’t start until I get a push. I would appreciate any information that you can offer