On modern direct-injection gasoline engines and diesel engines, the high-pressure fuel pump is mounted on the engine. This mechanical pump is capable of upwards of 10,000 psi. Fuel pressure regulation is different than in low-pressure fuel injection systems, controlled electronically instead of mechanically. As the mechanical fuel pump is mounted on the cam shaft, it is constantly pumping. Depending on system design, there are a few ways to modulate fuel rail pressure. 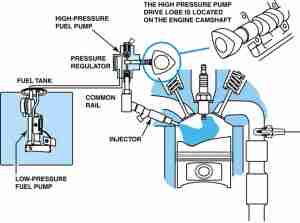 This is a generic DTC description, which means that automakers may use different descriptions. Here are a few examples:

Depending on year, make, and model, DTC P0089 may have number of causes. Here are some of the most common. 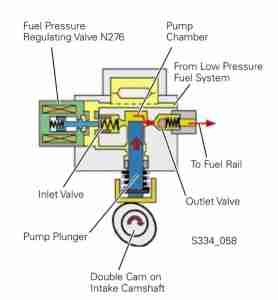 Depending on vehicle type and failure mode, you may experience a number of undesirable conditions and drivability problems. You may not be able to start your vehicle at all, or it may start and run a few minutes and stall. If the engine runs, you may experience poor fuel economy, poor performance, lack of power, or rough idle. If actual fuel pressure is too high, you will likely experience engine knocking, a rich condition with possible fuel trim DTCs, even black smoke from the exhaust.

Because of the complexity of the high-pressure fuel system, you will need a scan tool with live data-streaming capabilities for the best chance of diagnosing this problem. A high-pressure fuel pressure gauge would be helpful, but quite possibly unavailable outside of a shop environment. A DVOM (digital volt-ohm meter) will also be useful. Keep in mind that this guide will only give you some general strategies in diagnosing your problem. Specific diagnostic steps and verification data depend entirely on year, make, and model, which information can be found in a factory repair manual. 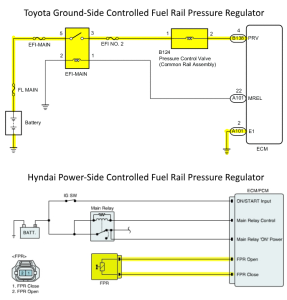 I just had new GM injectors installed about 1000 miles ago ran great now goes into limp or safe mode after running about one minute shows p0089 code fuel pressure regulator where do I ck. From here

Year, Make, Model, Engine data, please? After a little bit of digging, I read there is at least one GM TSB referring to a new sub-harness for the fuel pressure regulator, and I’m sure I’ll have a full write-up on this DTC, soon.

we have a nissan cabstar and i find this code from the computer of my unit P0089 Fuel Pressure Regulator 1 Performance, i fix the problem with a new one and, still find this code, can you help me ? pls..

Alex-
Have you checked the circuit from the ECM to the Fuel Pressure Regulator? There should be 0.0 Ω resistance from end to end. A loose or corroded connection can easily skew sensor readings.
-Ben

Sorry Benjamin, we change too a sensor of pedal of aceleration, and still continue with the code P0089

i have a renault kangoo 1.5 dci70 van with the same error code. the van will not start without easy start ticks over but dies when driven. any ideas?

I replaced high pressure sensor on audi a3 2006 now car wont start .if I disconected start but gime code p0190 and p0089
wHAT CAN BE THE PROBLEM

I have a 2009 mini cooper S with a check engine light(codes are P0001, P0002 and P0003) The car seems to run and start normal with some weakness in engine perfomance. I have a smog check coming up soon and do not have a clue where to begin to fix it. I would appreciate any help or advise you can give me. Thank you………….Dial