OBD II fault code P006A is a generic trouble code that is defined as “MAP – Mass or Volume Air Flow Correlation – Bank 1”, and is set when the PCM (Powertrain Control Module) detects a variation between the signal voltages of the MAP (Manifold Absolute Pressure) sensor, and the MAF (Mass Airflow Sensor. Note that “Bank 1” refers to the bank of cylinders on V-type engines that contains cylinder #1.

Much, if not most of the efficiency and low emissions of modern engines derive from the fact that PCM’s can control the air/fuel mixture effectively. However, to maintain an air/fuel mixture at or close to the stoichiometric ratio of 14.7 parts of air to one part of fuel throughout an engines’ operating range, the PCM needs to “know” exactly how much air is entering the engine because the PCM uses the volume of air that enters the engine at any engine speed as the basis upon which it makes calculations to the fuel trims. In technical terms, fuel trims are the corrections or adaptations to the injector pulse widths to increase or decrease the amount of fuel the injectors inject at any given moment.

In practice, though, environmental factors such as the ambient temperature, altitude above sea level, and relative humidity all affect the density of atmospheric air. For instance, cold air is denser than hot air, which means that a smaller volume of cold air relative to fuel is required to establish a stoichiometric air/fuel ratio. Therefore, and as a practical matter, the PCM uses input data from a Mass Airflow sensor to measure the total volume of air that enters the engine, and an Absolute Manifold Pressure sensor that measures the amount of air in the intake manifold as a pressure value.

In a fully functional system, other sensors, including the intake air temperature and barometric pressure sensors also play a role in the final calculation. In practice, the input data from these two sensors are applied to the data from the Mass Airflow sensor to compensate for air density variations caused by ambient temperatures and elevation above sea level. Thus, based on adjusted (or corrected) input data, the readings from the MAP and MAF sensors should correlate very closely, and it is this correlated data the PCM uses to calculate adaptations to fuel trims.

When a failure, malfunction, or defect occurs in the interactions between the MAP and MAF sensors that cause a miscorrelation between the input data from the two principal sensors that exceed a predetermined threshold, the PCM recognizes that it cannot control the air/fuel mixture effectively, and it will illuminate a warning light and set code P006A as a result. Note though that on most applications, the PCM will revert to a default fueling strategy when this code sets, and therefore, the PCM will usually not set this code or illuminate a warning light when it detects a miscorrelation for the first time. On some applications, the PCM has to detect the fault multiple times before it will set this code and illuminate a warning light.

Where is the P006A sensor located? 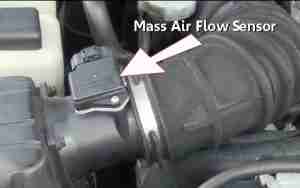 This image shows the location of the MAF sensor on a BMW application. Note though that while MAP sensor failures often cause code P006A, the vast majority of instances of this code are caused by failures of MAF sensors.

What are the common causes of code P006A?

What are the symptoms of code P006A?

Common symptoms are much the same across all applications, but note that the severity of one or more symptoms may vary between applications-

In my Land Rover Disco 4 this means cracked inlet manifold. The over pressure caused by turbo will escape through the crack.

I have a P006a and a 132B. I am having a hard time hunting it down to. I have changed the mass flow sensor and no luck. Have you haf any luck?

Do you have a tune on truck? On mine I tune to stock it’s gone. I put the tow tune on it pops up.