OBD II fault code P0057 is defined as “Oxygen Sensor Heater Control Circuit Low (Bank 2 Sensor 2), and is set when the PCM (Powertrain Control Module) detects a signal voltage from oxygen sensor #2 that does not fall within the predefined range for that sensor. Note that “Bank 2” refers to the bank of cylinders that does not contain cylinder #1, and that “Sensor 2” refers to the oxygen sensor that is located after (downstream of) the catalytic converter(s).

During normal (closed loop) engine operation, the signal voltage from the #2 oxygen sensor(s) will vary constantly, and in cases where the PCM detects no changes in the sensor signal voltage(s) for a period of about 8 continuous seconds, code P0057 can be set and the CHECK ENGINE light triggered. 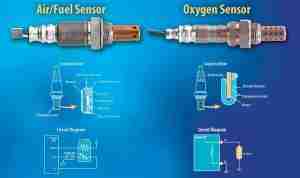 Common causes of code P0057 include the following-

While the symptoms of code P0057 are much the same on all vehicles, the severity of one or more symptoms may differ from vehicle to vehicle. Typical symptoms include the following-

NOTE #1: It should be noted that code P0057 indicates a fault in the oxygen sensors’ heating control circuits, rather than issues with fuel/air metering. In cases where codes relating to fuel/air metering are present along with P0057, these codes must be resolved before starting an electrical diagnosis of code P0057.

NOTE #2: At the risk of overstating the case, code P0057 relates to oxygen sensors that are located after the catalytic converter. To avoid confusion, and prevent testing/replacement of the wrong oxygen sensors, always consult the repair manual to determine the location, color-coding, and routing of the wiring associated with #2 oxygen sensors.

NOTE #3: Check for, and repair all exhaust leaks before starting an electrical diagnosis of code P0057. Exhaust leaks can contaminate the atmospheric air used by oxygen sensors, which contamination can result in inaccurate readings.

How do you fix it?