OBD II fault code P0029 is defined as “Exhaust Valve Control Solenoid Circuit Range/Performance (Bank 2)”, with “Bank 2” denoting the side of the engine opposite that contains cylinder #1 on engines with two cylinder heads. Code P0029 is set when the PCM (Powertrain Control Module) detects a fault in the electro-hydraulic control system of the VVT (Variable Valve Timing), or VCS (Variable Camshaft System).

Since the engine oil is the agent that transfers power to the actuator that ultimately controls the exhaust valve timing, it should be obvious that oil of the correct type, viscosity, and cleanliness is crucially important to ensure the proper functioning of these systems. The image below shows a typical VVT control solenoid. 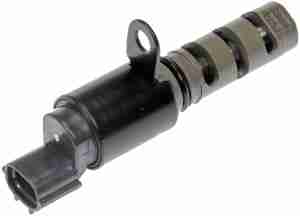 The most common cause of code P0029 by a large margin is a low engine oil level, followed closely by low oil pressure issues and incorrect, or unsuitable lubricating oil. Other common causes of code P0029 include-

Although the symptoms of code P0029 are much the same on all vehicles, the severity of one or more symptoms may vary from vehicle to vehicle. Below are some common symptoms of this code-

NOTE: When diagnosing code P0029, start the procedure by inspecting the engine for oil leaks that could have reduced the engine oil level. Repair oil leaks as required, top off the oil level, clear the code, and operate the vehicle. Rescan to see if the code returns. If the code persists, proceed as follows-

One other, albeit unlikely, possibility involves a possible defective PCM, but PCM failures are exceedingly rare, meaning that all other avenues must be explored to trace and correct the root cause of code P0029 before the PCM is replaced.

Well, I’m thinking that the DTC might be due to a harness problem or maybe a disconnected valve. On the other hand, running issues after a head gasket job could be practically anything – head gasket leak, coolant leak, oil leak, bent valves, clogged fuel injector, fouled spark plug…