Code P0020 is defined as “Camshaft position (CMP) actuator, intake/left/front, bank 2 circuit malfunction”, and is set when a fault is detected in the electrical circuit that controls the variable valve/cam timing system. Code P0 020 relates to the A, or Inlet camshaft on Bank 2, which is the set of cylinders opposite the side of an engine that contains cylinder #1. 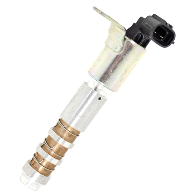 Common causes of code P0 020 include:

NOTE: Symptoms of Code P0 020 are of little, or no use as diagnostic aids, since these symptoms can be caused by a myriad other, unrelated issues. At best, the above symptoms can be used as confirmation of a circuit failure in the variable valve/cam timing system.

Troubleshooting Code P0 020 involves a circuit check, and all diagnostic procedures must therefore include inspecting, and testing the wiring harness and control solenoid. The circuitry is relatively simple, consisting for the most part of a 12 volt DC power supply to the oil flow control valve, a ground pin to which the ECM supplies a ground at the correct time and in the correct amount, and a feedback loop to the ECM to confirm functionality.

I have a 2004 Audi S4 Cabriolet B6 4.2L with code 17944 on one scanner and P0020 on the other scanner. I assume both codes are the same . Based on the info above, I would assume the oil flow control valve may be defective. The car is not driven much and the time between the last oil change was over 1 year. I assume something from the old oil may have damaged the sensor. Your thought are welcome.

Yes, those codes are the same, referring to the Bank 2 VVT actuator circuit. I’m not sure if old oil would explain a circuit malfunction, but I’m not familiar with how VW/Audi interprets those kinds of failures. Given that it’s a circuit fault code, I’d get a DMM, disconnect the VVT solenoid (oil control valve), and test for continuity of the coils in the valve. Resistance across the two terminals (in the valve, not the ECM) should be 8-13 Ω. Replace if outside these limits. Otherwise, I’d suspect a broken wire somewhere between the ECM and the valve, perhaps due to chafing or rodent damage.

Ben – I changed the cmp2 sensor as it looked pretty bad but that did not clear the problem. I am trying to find the VVT for this specific engine. I will continue next to trace the wiring. Thank you for your help.

Yeah, the sensor was working. How was the VVT solenoid wiring internal? The coil should have some resistance, but I can’t find the specification. Also, there should be no continuity to ground from any terminal in the solenoid.