The purpose of cylinder deactivation systems, also known as variable displacement systems, is to deactivate some cylinders in an engine under some operating conditions to save fuel, and to reduce emissions. In practice, these systems will only become operational when not all of an engines’ power is required, such as during light engine loads or steady highway cruising speeds.

In terms of operating principles, the PCM will continuously collect data from a variety of engine and other sensors, including the Mass Airflow Sensor, Throttle Position Sensor, Intake Air- and Coolant Temperature Sensors, Engine Speed Sensor, and others to calculate the total load on the engine at any given point in time. When the PCM deems conditions suitable for cylinder deactivation, it will energize oil control solenoids that allow pressurized engine oil to act on both the intake and exhaust valves of affected cylinders.

This action not only closes all the valves on the deactivated cylinders but it also disables both the ignition system and fuel injectors on the affected cylinders, which on engines with 8 and more cylinders, can be as high as 50% of all cylinders on the engine. The action of closing valves and keeping them closed traps the exhaust gasses from the last power stroke in the cylinder to act as “springs” that both compress and expand under the piston’s movement, which helps to maintain engine balance.

When operating conditions change and full engine power is required, such as during overtaking slower traffic, the valves on the deactivated cylinders are reactivated, and both ignition and fuel delivery is restored. While this switching is sometimes noticeable in engines with 4 or 6 cylinders, the process is largely seamless and undetectable in vehicles that have engines with 8 and more cylinders.

Regardless of the number of cylinders on any given engine though, cylinder deactivation systems are intended to be operational only under very clearly defined operating conditions. Therefore, if the PCM detects faults, failures, or malfunctions in any associated sensor and/or electrical circuit that affect either the activation or deactivation of the system, it will set code P3400, and illuminate a warning light. Note that on some vehicles, the PCM will only set a code and illuminate a warning light on the second consecutive failure of the cylinder deactivation system.

Where is the P3400 sensor located? 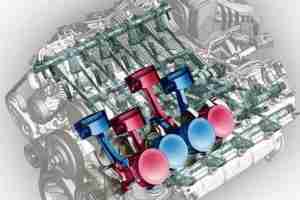 Even though most cylinder deactivation systems use many, if not most of the components that control variable valve timing systems, there are too many different designs in use today to indicate the location even a small fraction of all relevant components here.

What are the common causes of code P3400?

NOTE: Cylinder deactivation systems typically require that all implicated sensors operate within narrowly defined ranges or voltages before the system can be activated. Therefore, any implicated sensor that is not operating correctly can prevent the cylinder deactivation system from working, or if it has been operational, from deactivating. As a result, code P3400 can sometimes be accompanied by multiple other codes that, at first sight, might not appear to be related to P3400.

throwing a p3400 cylinder auto shutdown…
why, what causes it

2011 Honda pilot 197000 miles on it started getting this code. I was reading online and some people said it was the spark plug because the ignition system shuts down two of the cylinders for the Eco mode so I changed the spark plugs I’m still getting the code.

Hi, been 8 months since you posted this. Have you solve the problem? My mom’s 2010 pilot has the same code with only 153k miles on it