SPECIAL NOTES: It should be noted that very few online resources and/or trouble code data bases list code P3100 with a definition other than P3100 – “Manufacturer Controlled DTC”. In fact, even most official BMW and MINI sources do not assign any particular meaning or definition to this code, and it is only the most recent official sources that assign a specific injector control issue to this code. This allows BMW and MINI to differentiate between older low-pressure fuel injection systems, and the newer high-pressure injection systems that use altogether new technologies and control algorithms. What this means in practice, is that BMW had applied to the SAE (Society of Automotive Engineers) to assign a specific definition and meaning to a code that was previously reserved, and could have been used by any manufacturer to describe a manufacturer-specific issue. As it happened, though, BMW/MINI was the first manufacturer to apply to the SAE to use this code to describe a specific issue on a (relatively) new system. END OF SPECIAL NOTES.

OBD II fault code P3100 is a manufacturer-specific trouble code that is defined by carmakers BMW and MINI as, “Cylinder 1 High-Pressure Injector Low Side Circuit Open”, and is set on listed applications when the PCM (Powertrain Control Module) detects an open circuit in the electrical circuit that controls the fuel injector on cylinder #1.

NOTE: Note that on BMW and MINI vehicles, the PCM (Powertrain Control Module) is known as the DME, which stands for Digital Motor Electronics.

Regardless of the mode of control, though, the control signal to each injector is supplied by a cylinder-specific driver circuit in the control module. In practice, these driver circuits make it possible not only to supply the control impulse at very precise values but also for varying amounts of time. The latter function is to enable a control module to vary the injectors’ “ON” time, aka “duty cycles” to make adaptations to the amount of fuel that each injector can inject into the cylinders.

These adaptations are known as fuel trims, and they are required to maintain the air/fuel mixture as close to stoichiometric* levels as possible during engine operation.

*On gasoline engines, a stoichiometric air/fuel mixture consists of 14.7 parts of air to one part of fuel.

In practice, the injector drivers on most BMW and MINI applications are fairly robust and reliable, meaning that injector driver failures are extremely rare in these applications. However, BMW and MINI applications are not known for the quality and/or durability of their wiring harnesses, and breaks in continuity on injector control circuits are fairly common, as a result. Nonetheless, when a DME detects an open circuit in the circuits that are associated with injector #1, it will recognize that it cannot control the fuel delivery system effectively, and as a result, it will set code P1300 and illuminate a warning light.

Where is the P3100 sensor located? 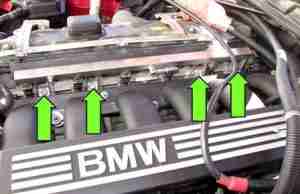 This image shows the locations (arrowed) of the fuel injectors on a BMW application. Note that since the high-pressure fuel systems on modern BMW and MINI applications operate at extreme pressures, it is not recommended that non-professional mechanics work on these systems.

WARNING: As a practical matter, even the residual pressure in a modern fuel system can cause severe personal injuries if the pressure is not relieved safely, so the better option is always to seek professional assistance with diagnosing and repairing any fuel system-related issues on modern BMW and MINI applications.

What are the common causes of code P3100?

Common symptoms of code P3100 on listed applications are largely similar across all applications, and could include one or more of the following-

NOTE: In cases where multiple trouble codes are present, and particularly trouble codes that relate to misfires on cylinder #1, code P3100 may sometimes also be present, but as a consequence of the misfire code(s), as opposed to P3100 being the cause of the misfire. This is because when misfires are present for whatever reason, the DME will deactivate the fuel injectors on the affected cylinders to protect the catalytic converters. Thus, while misfires will typically not set open circuit codes, be aware that this can, and sometimes does, happen on occasion although exactly why this happens is not always clear.