What Does Code P2BAC Mean?

OBD II fault code P2BAC is a generic code that is defined as “NOx Exceedence – Deactivation of EGR”, and is set when the PCM (Powertrain Control Module) detects that the levels of NOx (oxides of nitrogen) in the exhaust gas exceeds a  maximum allowable threshold as the a result of the EGR (Exhaust Gas Recirculation) system being deactivated. Note that this code only applies to vehicles that are fitted with EGR systems.

It should be noted that code P2BAC is informational in nature, and is set only to alert the driver that the EGR system has been deactivated. As such, this code cannot be diagnosed in the same manner as most other codes; however, the underlying reason why the EGR system has been deactivated should be investigated and corrected without delay. As a point of interest, code P2BAC will always be accompanied by one or more other exhaust system related codes, and repairing these codes will resolve P2BAC as well.

The purpose of EGR is to introduce metered quantities of exhaust gas into the engine along with the air fuel mixture to reduce combustion temperatures to below the point (about 2800 deg F) where harmful levels of NOx forms as a result of the combustion process. In practice, the introduction of exhaust gas has a quenching effect on the combustion flame, and it is this quenching effect that limits or prevents the formation of NOx.

However, since the introduction of exhaust gas dilutes the air/fuel mixture, EGR only occurs during certain conditions, such as during sustained high speed driving, or under other conditions where the introduction of exhaust gas will not affect combustion negatively. For this reason, EGR never occurs during idling or at low engine speeds when the process could cause the engine to stall, or to lose significant amounts of power as the result of the dilution of the air/fuel mixture.

In terms of operation, the PCM uses input data from several engine sensors, such as the coolant temperature, engine speed/load, and exhaust gas temperature sensors to determine an appropriate EGR strategy. When conditions are deemed suitable, the PCM opens a dedicated EGR valve (that is connected to the exhaust manifold) to allow exhaust gas to enter the engine under engine vacuum. However, the PCM is able to control the degree to which the EGR valve opens, and furthermore, to monitor the amount of gas that flows through the valve, based on the engine speed and the degree to which the EGR is opened via a dedicated EGR valve position sensor.

As a practical matter on most applications, the PCM has the ability to deactivate the EGR system should malfunctions, failures, or issues occur that prevent the PCM from controlling the EGR system effectively. Should the EGR system be deactivated for whatever reason, excessive amounts of NOx will necessarily be formed during the combustion process, and the PCM will therefore set code P2BAC and illuminate a warning light as a warning to the driver that the EGR system had been deactivated or disabled.

Where is the P2BAC sensor located? 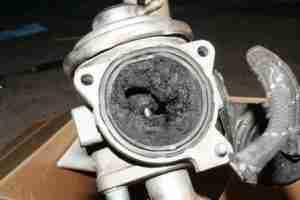 The image above shows an EGR valve that is clogged with excessive amounts of carbon, which is a common cause of code P2BAC. Note that while most EGR valves share this general design, the actual appearance of EGR valves vary somewhat between applications. However, most EGR valves are located on the cylinder head, and they can generally be easily identified by the presence of an electrical connector, and the small-diameter steel tube that connects the valve to the exhaust manifold.

What are the common causes of code P2BAC?

Some common causes of code P2BAC could include the following-