SPECIAL NOTES: It should be noted that, a) although almost all car manufacturers label the electrically operated auxiliary coolant pumps on their products as “Pump B”, and, b) that code P261A refers to an open electrical circuit on all applications, auxiliary coolant pumps perform vastly different functions on different applications. It is therefore imperative that the function of the auxiliary pump on the affected vehicle be determined before attempting repairs, since ignoring this code could cause engine failure on some applications if the problem is not corrected in a timely manner. END OF SPECIAL NOTES.

On some applications, the function of the auxiliary coolant pump is to circulate hot coolant through the heater core. This could be required both when the engine is running, and after the engine is switched off.

On many late model vehicles, advanced engine designs translate into the fact that very little waste heat is generated, meaning that in order for the engine to heat up in the shortest possible time to comply with emissions regulations, a small volume of hot coolant is diverted from the main cooling system to heat the cabin. In practice, this part of the cooling system is largely separate from the main cooling system, and coolant circulation in this system is accomplished by passing the coolant through the heater core with a dedicated electrically operated coolant pump.

On other applications, the auxiliary coolant pump is activated when the engine is switched off when both the coolant and the engine are very hot. The reason why this is done on some applications is to prevent the coolant absorbing heat from the engine at different rates in different parts of the engine. This phenomenon is known as “heat soak”, and while this happens without any adverse effects on many engines designs, in some cases uneven cooling of the engine can warp cylinder heads, which in turn, usually damages cylinder head gaskets.

Thus, to ensure that susceptible engines cool down evenly, the auxiliary coolant pump will circulate coolant around the cooling system until the overall temperature of the engine is such that warping of, or damage to critical components such as turbocharger bearings will not occur. This can take anywhere from a few seconds to several minutes, depending on both the engine coolant temperature and the ambient temperature.

In still other cases, the auxiliary coolant pump’s function is to circulate coolant through a system that is intended to manage and control the temperature of the Exhaust Gas Recirculation (EGR) system. Since the function of EGR systems is to introduce metered amounts of exhaust gas into the cylinders to reduce the formation of harmful exhaust emissions, cooling the exhaust gas down before it is introduced into the engine means that less exhaust gas is required to achieve adequate quenching of the detonation flame.

Thus, regardless of the function of the auxiliary coolant pump on any give application, the PCM will set code P261A and possibly illuminate a warning light when it detects an open electrical circuit either in the pump motor, or in any associated wiring harness.

Where is the P261A sensor located? 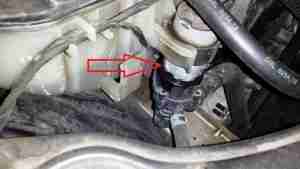 The image above shows the location (arrowed) of the auxiliary coolant pump on a Mercedes application, where it is fixed to the coolant expansion tank. Note though that the location of this pump varies greatly between applications; for instance, on BMW “Z” models, the pump is usually located on a strut tower in the engine compartment, while on many VAG and related applications, the pump is located between the lower part of the engine and the radiator. On still other applications, the pump could be located inside a front wheel well, or be attached to the firewall.

Given the above, it is recommended that a reliable source of service information be consulted to identify and locate the auxiliary coolant pump on the affected application.

What are the common causes of code P261A?

Common causes of code P261A could include the following-

Low system voltage, such as might be expected when the battery is defective or discharged. In these cases, the low system voltage might prevent the pump from running when the engine is switched off, but note that this condition will typically be indicated by additional codes and/or warning lights

What are the symptoms of code P261A?

Depending on the function of the auxiliary coolant pump, typical symptoms could include one or more of the following-

Is it the electric water pump